To celebrate the Bring Them Home campaign with Leinster Rugby, we've got tickets to their game against Northampton to give away

Last month Leinster announced the ultimate Christmas gift for families with the launch of the ‘Bring Them Home’ competition, where Leinster supporters far afield were in with the chance to win two return flights to Dublin from anywhere in the world as well as a whopping €1,000 spending money, two VIP tickets to the annual Christmas Cracker game and a lovely Leinster goodie bags.

Michael Dawson, Chief Executive of Leinster Rugby said that they were "very much aware that the Leinster diaspora is worldwide" and that there was no better time to bring a lucky fan home than at Christmas, to really enjoy the festive period, and of course catch the annual Christmas Cracker. 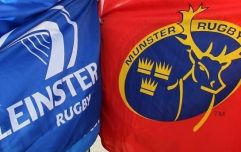 END_OF_DOCUMENT_TOKEN_TO_BE_REPLACED

Fans were invited to come up with a creative way to show their support for the Boys in Blue, and get involved on the Leinster Facebook page or their Twitter using the hashtag #LeinsterRugby. One fan in particular, who is based in Canada, came up with this pretty brilliant video that will take some beating in the competition.

To celebrate that fantastic competition, our mates at Leinster Rugby have given JOE tickets to the game against Northampton in the Aviva this Saturday, 14th December. After a scintillating display last weekend, the upcoming game at The Aviva Stadium is sure to be packed, but tickets are still available at the Leinster Rugby webiste and from Ticketmaster outlets nationwide.

However, if you fancy trying your hand at our competition, you could be in with a chance of winning two tickets to the game and kicking off the festive period in style. All you have to do to enter is answer the question below. Good luck!

popular
Seven more suspected cases of unexplained hepatitis in Ireland under investigation
Amazon Prime Video has just added 21 big movies to its library
Passengers warned that Dublin Airport situation is simply "unpredictable"
Russian soldier pleads guilty in first war crimes trial in Ukraine since its invasion
Couple injured after alleged homophobic attack in Dublin
Derry Girls fans in bits following emotional season finale
Has anyone seen Mr Tayto?
You may also like
3 years ago
Gardaí urge anyone who witnessed "instance of discriminatory" at rugby match to come forward
3 years ago
QUIZ: Can you beat the time limit and name all the counties in Leinster?
3 years ago
Johnny Sexton sent Anthony Foley's son a wonderful present on his birthday
4 years ago
Leinster win tense 2018 Champions Cup Final
4 years ago
The brilliant story of how Leinster prepped for the Champions Cup
4 years ago
Gardaí raid seven premises across Leinster suspected to be brothels
Next Page