Want to win a pair of tickets to Brian O’Driscoll’s last ever game of rugby this Saturday?

It is the RaboDirect PRO12 Final as well, of course and thanks to Specsavers, we have three pairs of tickets to give away.

Leinster take on the high-flying Glasgow Warriors at the RDS this weekend in an attempt to secure back-to-back RaboDirect PRO12 titles and give Brian O’Driscoll the perfect send-off at the end of what has been a glittering career.

Even Brian will admit that his send-off seems to be going on for an awful long time at this stage, but we’ll miss him badly when he’s gone and you could have the chance to say farewell at the RDS in what will be the last game he ever plays for Leinster and his last game as a professional rugby player. 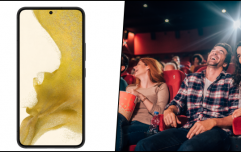 COMPETITION: Calling all movie fans! Here's how you can WIN a Samsung Galaxy S22 smartphone

END_OF_DOCUMENT_TOKEN_TO_BE_REPLACED

Thanks to Specsavers, the sponsors of the match officials, we have three pairs of highly-sought after tickets to give away (the game, unsurprisingly, is a sell-out) and to be in with a chance to win one of those three pairs, all you have to do is answer the question below.