WATCH: We have a winner in the Le Crunch Apple of My Eye Song Contest

The journey has finally ended but it's been a serious trip. We asked you to send in your best covers for the Le Crunch Apple of My Eye Song Contest and we weren't disappointed with the response. People from all over the country sent in their songs or turned up at the live audition and we were blown away by the standard of this year's competitors. 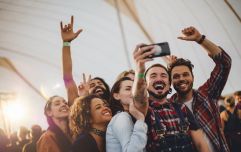 END_OF_DOCUMENT_TOKEN_TO_BE_REPLACED

After much deliberation, the public vote and the judges narrowed it down to just five finalists: Katie Cassidy, Slow Seas, Crossing Paths, Scoops and Mimi Lane & Stephen Kelly. But if we've learned anything from the cheesy 80s action flick, Highlander, it's that you can't have five winners.

The five took to the stage of Whelan's to duke it out in a musical battle and see who could win over a panel of judges that included Maximum Media Broadcast Director Paddy McKenna, Ham SandwicH singer Niamh Farrell and Peter Dunne, owner of BARE in the Woods.

With €1500 on the line for the winner, it was a pressurised situation for the musical acts but they pulled out the stops to provide a great night's entertainment for the packed audience. The audience was also treated to live performances from former Le Crunch Apple of My Eye Song Contest winners Brave Giant and Flat Out on the night. 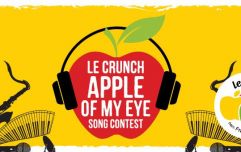 END_OF_DOCUMENT_TOKEN_TO_BE_REPLACED

When the dust settled, Katie Cassidy was announced as the deserving winner of the Le Crunch Apple of My Eye Song Contest for her amazing cover of 'Feeling Good.' And so it's over but we're sure you'll be hearing more from Katie and the other talented finalists.

Thanks again for everyone who got involved and submitted songs. And in case you missed out on the final in Whelan's, here's a little video that captures the finale to what's been a fantastic competition.

Advertisement
popular
An action-packed thriller is among the movies on TV tonight
Gardaí unveil new Armed Support Unit vehicles to replace older models
Bus Éireann’s service from Dublin to London will restart this week
Temperatures to hit highs of 25 degrees as summer set to finally arrive
A serial killer thriller with 100% on Rotten Tomatoes and 5 more movies & shows to watch this weekend
Leo Varadkar slams allegations made by "sworn political opponents" after DPP ruling
WATCH: Protester interrupts Good Morning Britain with 'Bye Bye Boris' song
You may also like
5 days ago
The JOE Friday Pub Quiz: Week 301
6 days ago
Radio station plays 'Killing in the Name' non-stop from 6am after multiple staff get fired
1 week ago
QUIZ: Can you guess the pixelated album cover?
1 week ago
R Kelly sentenced to 30 years in prison for sex trafficking and racketeering
1 week ago
Travis Barker rushed to hospital after tweeting "God save me"
1 week ago
Lizzo pledges $1 million for Planned Parenthood and abortion funds
Next Page