Will you step up to the "Iron Maths" challenge?

Irish start-up xyMaths is challenging members of the public to take part in its Iron Maths Challenge by taking the Honours Maths Leaving Cert exam next June.

In a play on the Iron Man contest, the education provider has announced it is seeking out two candidates who previously took either Ordinary or Higher Level Maths but always thought they could have done better to embark on its new challenge.

END_OF_DOCUMENT_TOKEN_TO_BE_REPLACED

“Through conversations with friends over the years it’s become totally clear to me that many people really do have nightmares about the Leaving Cert! I mean actual nightmares. Maths is often part of that. Looking back, a lot of people think that they really could have done better," founder and lead tutor of xyMaths Dr. Conor Purcell said in a statement.

“With the xyMaths Iron Maths Challenge we want to show future students that Higher Level Maths is achievable. These days there are 25 extra points for Higher Level and over the last couple of years we have already seen an uptick in the numbers of students opting for it.

"This will produce students more skilled in mathematics, armed with useful tools which can help them become great engineers, technologists, scientists, medical professionals or financiers, each an important part of a modern economy and thriving society. Also, on a practical note, people who failed previously now have a chance to do it again, and progress on to whatever college direction they choose.”

Purcell also noted that now is a good time for the challenge as many people at the moment are taking up personal projects at home. 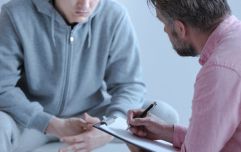 END_OF_DOCUMENT_TOKEN_TO_BE_REPLACED

The candidates will gain free access to the xyMaths platform consisting of live interactive video group lessons with Purcell each week, as well as a library of past recordings.

Candidates are asked to pay for their application to take the Leaving Cert exam; the deadline for registration is 28 January

And then, once the exam is complete, no matter their result, they will be refunded.

“We want to see a commitment. You have to have skin in the game,” Purcell said.

popular
One of the best movies of the decade has just been added to Netflix
20 years ago, one of the best sci-fi movies of the 21st century was a box-office bomb
Surprise frontrunner emerges as potential next James Bond as producers 'love him'
Olly Murs slammed over 'misogynistic' lyrics on 'shocking' new single
U2 drummer Larry Mullen Jr. says band may perform without him in 2023
Katherine Ryan says famous TV star is a ‘predator’ and everyone in industry knows
One of the scariest films of all time is among the movies on TV tonight
You may also like
7 months ago
Teachers union president slams Norma Foley over new Leaving Cert proposals
8 months ago
Two brand new subjects announced for the Leaving Cert as part of major overhaul
10 months ago
Opposition parties call for Government to consider "Hybrid Leaving Cert"
10 months ago
State exams this year "cannot go ahead as planned", says students' union
1 year ago
State Exam Commission apologises to 144 LCA students impacted by error
1 year ago
Significant rise in points for most courses as CAO offers released
Next Page