An American mum was left stunned when after her two-year-old daughter managed to order a €380 couch off Amazon.

Isabella McNeil explained to NBC San Diego she had been searching for new couches on her phone, and had recently been looking on the Amazon app. 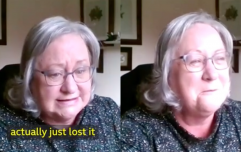 END_OF_DOCUMENT_TOKEN_TO_BE_REPLACED

And she thought nothing of it when her daughter, Rayna, asked her to play with the phone.

But a few days later, she received a shipping notification from the digital retailer - and, it's safe to say, was definitely confused.

It turns out that she had left the Amazon app open on her phone and, when Rayna had been playing with it, the toddler accidentally pressed the "Buy Now With 1-Click" button.

Which means that Isabella and her family are now the owners of a €380 ($430) tufted grey couch.

She told the outlet:

"I said, 'What? My couch has shipped? I didn’t remember ordering a couch.'"

And when she remembered Rayna had been playing with her phone, the California mum made the connection.

"Now I know it’s really dangerous and [I need] to make sure the Amazon app is closed before my daughter takes the phone. It’s just so easy."

END_OF_DOCUMENT_TOKEN_TO_BE_REPLACED

Isabella tried to look into cancelling the order, but it was too late - and the couch was delivered, as promised.

But when she looked into getting a refund, she said she found there was a €70 ($79) restocking fee and she would need to cover the shipping costs to send it back to Amazon (around €88, or $100).

She is currently trying to resell it on OfferUp, Facebook Marketplace or Craigslist - and has since seen the funny side in what happened.

Sharing the advice she would give to parents to prevent something similar happening to them, she said:

"Make sure all of the apps are closed, make sure your passwords are fingerprint-locked, make sure they don’t know your number password, because kids are a lot smarter than we think."

The Big Reviewski || JOE · TBR Spotlight: Loki - Episode Two - 'The Variant'
popular
Man in his 40s pronounced dead after fatal traffic collision with lorry in Louth
Public warned about another sophisticated phone scam doing the rounds
QUIZ: Name all the counties of Ireland that contain 3 vowels or more
Dr Tony Holohan warning as Delta variant accounts for 20% of Covid-19 cases in last week
The Queen appealing for volunteers to weed the garden of her Sandringham Estate
Three men arrested after reportedly attacking staff of premises on South William Street
Garda union hits out at "absolute confusion" over outdoor drinking and dining
You may also like
1 month ago
Al-Jalaa tower block in Gaza is flattened by Israeli airstrikes
2 months ago
Joe Biden's dog Major has bitten another White House employee
2 months ago
Police handling of Sarah Everard vigil appropriate, says watchdog
2 months ago
Hairdressers unlikely to open until the middle of summer
2 months ago
Joe Biden allocates $86 million to rehouse migrant families in hotels
3 months ago
Man aged 50 arrested over 2001 death in Michael Barrymore's pool
Next Page