Life's a game of inches.

Tens of thousands of people gathered for the London Marathon on Sunday. 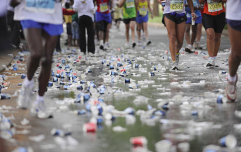 END_OF_DOCUMENT_TOKEN_TO_BE_REPLACED

Really, though, little of the interest in the marathon is directed at its elite runners, unless they're shitting themselves outside Marble Arch.

Most of those watching are there for the masochistic angels. The washing machine-carrying, costume-wearing flagellants, usually for sick children or some other worthy cause.

So when this Big Ben-wearing animal, this Leviathan, finished his 26.2 miles, it is poetic that the achievement was nearly impeded by the very structure of the finish line.

So tall was Big Ben's spire - 96 metres if you're interested - it could not finish the marathon without the assistance of a helpful steward, forcing the costume through and bending its owner double in the process.

I guess this is why you don't see many Big Bens out joggingpic.twitter.com/bBILuq7irw

Ride on you crazy diamond.

Nothing can stop your fundraising desire, bar the physical infrastructure of the race you're running.

popular
QUIZ: How many of these characters from The Simpsons can you name?
Two children, aged 3 and 4, hospitalised after consuming suspected cannabis jellies
Australian woman stuck with Irish accent after tonsil surgery
The 50 most iconic songs of all time* have been revealed
Alastair Campbell accidentally announces death of The Queen live on GMB
Assassin's Creed director on why Ireland is the perfect setting for their new game
PICS: The man with the biggest penis in the world has one unbelievable problem with it
You may also like
3 years ago
Masterchef contestant dies after collapsing during London Marathon
1 month ago
First-time buyers in Galway: This virtual First-Time Buyers Masterclass will kickstart your mortgage
1 month ago
The 10 best beaches in Ireland, as named by Lonely Planet
1 month ago
First-time buyers in Dublin: This virtual First-Time Buyers Masterclass will kickstart your mortgage
1 month ago
Aldi's outdoor hot tubs to return to shops this weekend
1 month ago
Richard Branson is renting out his second private island
Next Page