Residents of Clare Island off Mayo's west coast were left in stitches when they discovered local man Christian Pinder getting into a bit of a twist with one of his neighbour's rams.

The day started off innocently enough when Pinder, joined by local pals, decided to go day drinking in the local community centre bar, where he was hard pushed to find a seat.

END_OF_DOCUMENT_TOKEN_TO_BE_REPLACED

Upon sussing out his options, Pinder decided to think outside of the box and offer shelter to a local farm animal.

JOE spoke to his cousin, Conor, about how the make-shift seat came to be.

"There was a ram wandering around outside and the people in the bar started talking about it so he decided the ram might want a pint." 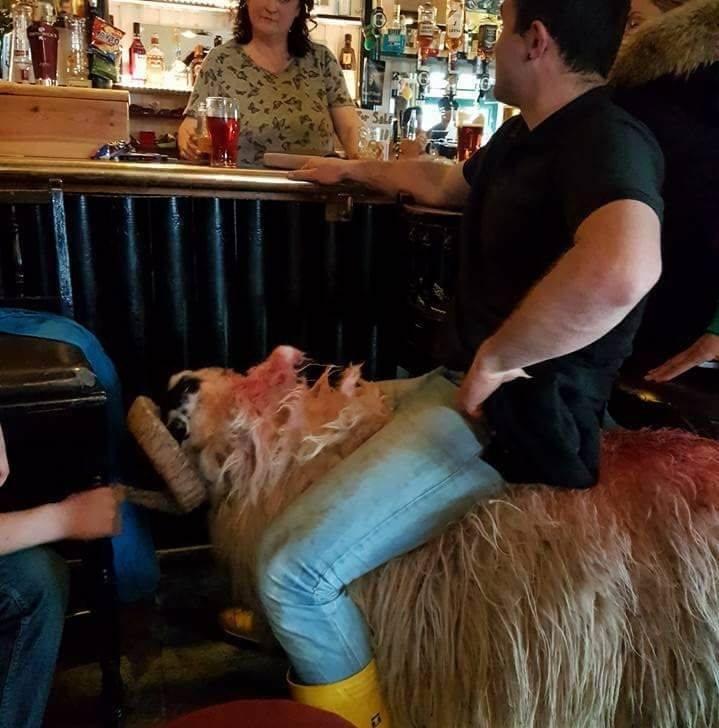 Following a good laugh and a few pints, Pinder set for home feeling all the merrier.

However, it seems that the ram had the last laugh – as it went rogue on Pinder's return to the house.

END_OF_DOCUMENT_TOKEN_TO_BE_REPLACED

Pinder, attempting to catch the ram with the intention of returning it to his neighbour's farm, ended up chasing the animal quite comically around a house next door to the local pub.

And, we think we can quite confidently say, that the ram won this round.

Don't worry Christian, you'd had a few pints... You'll get him next time.

The Big Reviewski || JOE · The Big Reviewski with Dune, a mini-Hangover reunion & the best of Timothée Chalamet
popular
Vin Diesel walked Paul Walker's daughter down the aisle
The JOE Movie Quiz: Week 125
One of the best thrillers of the decade is among the movies on TV tonight
After a decade on the run, Colombia's most wanted drug lord is finally captured
Report: Crew left Alec Baldwin film set in protest before fatal shooting
The JOE Friday Pub Quiz: Week 266
The JOE Music Quiz: Week 78
You may also like
3 weeks ago
Drunk man reported missing ends up joining search party to find himself
1 month ago
WATCH: The interview between Niall Horan and Lizzo is an absolute flirt-fest
5 months ago
Shrek fan notices X-rated Easter egg that we all missed as kids
8 months ago
"I am not a cat" - Texas lawyer turns on kitten filter during court Zoom, and can't switch it off
1 year ago
25 of the funniest tweets you might have missed in October
4 weeks ago
Waterford has been crowned as the best place to live in Ireland
Next Page