Not what you expect to see when you go to see Spider-Man at 3pm.

A caller has just rang into Joe Duffy to complain about two different couples having sex in a Dublin cinema, while his son and his friend went to see Spider-Man.

The incident in question took place at an afternoon screening of the Marvel movie in IMC Tallaght in The Square. Omniplex are now delivering cinema popcorn to your door

END_OF_DOCUMENT_TOKEN_TO_BE_REPLACED

The caller said that two different couples in the cinema had sexual intercourse while the movie was going on.

He was outraged that nobody came in at any point to check that nothing untoward was happening in the screen, and lodged an official complaint with the cinema soon after it happened.

He said: "To be honest with you they were shocked, they froze... If someone's prepared to do that in front of me and my pal, there's obviously something not right... This was obviously pre-planned by them. They knew full well what they were going to do."

"As a parent, I'm shocked. I'm appalled... There's no way you can condone this." 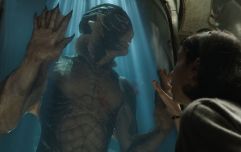 END_OF_DOCUMENT_TOKEN_TO_BE_REPLACED

Somebody then called in to say that this sort of thing would never happen in Galway, and asked "What is the cinema becoming?"

Despite the serious nature of the topic, Joe Duffy couldn't resist a fairly solid pun about the legal aspect of the whole thing, describing it as a "50 shades of grey area". Good stuff.

You can listen to the section from Thursday's episode of Liveline here.

popular
Waterford man sentenced to three months imprisonment for operating "cruel and illegal" puppy farm
The long-awaited MetroLink is finally happening, for real this time, honest
Netflix has just added 33 very big movies to its library
The full list of cancelled flights in and out of Dublin Airport on Monday (so far)
QUIZ: Can you guess the crisps from the pixelated packet?
One of the coolest movies of recent years is now available to watch at home
QUIZ: It's time for one of our trickiest General Knowledge Quizzes yet
You may also like
21 hours ago
James Cameron gives surprising updates on Avatar 4 and 5
2 days ago
The 24 biggest movies still to come to cinemas in 2022
3 days ago
All of the new releases coming to Netflix, Prime Video, Disney+ and cinemas in July
4 days ago
The 10 Best (and 5 Worst) Movies of 2022 so far
4 days ago
6 must-watch movies coming to Irish cinemas in July
4 days ago
Paramount reportedly making top secret prequel to one of the greatest horror movies of all time
Next Page