Missed out an Electric Picnic ticket? Fear not. All hope is not yet lost.

Not many festivals are able to immediately sell out before any acts have been announced, but Electric Picnic has (again), showing just how great the demand for EP is each year.

And if you missed out on a ticket when they went on sale to the public in December, we're sure you were very upset to be missing one of the biggest occasions of the year.

Tour de Picnic has launched once again for 2020, giving participants the chance to get a weekend pass to EP by promising to cycle their way to Stradbally from Tallaght Stadium.

This year, participants are required to raise €450 (including a registration fee), to take part in the Tour de Picnic. All of the money raised will go to LauraLynn – Ireland’s Children’s Hospice, Ronald McDonald House and ISPCC Childline. 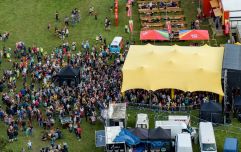 Tickets for Electric Picnic 2020 have officially sold out

END_OF_DOCUMENT_TOKEN_TO_BE_REPLACED

The current registration fee is at an early bird rate of €60, but it will increase to €100 when those early bird places are sold out.

You can sign up for Tour de Picnic now, and you have until 30 June to reach the fundraising target.

Despite Body & Soul ending a lengthy partnership with EP, it has also been confirmed that the Stradbally festival will have an increased capacity of 70,000 for this year's event.


popular
Here are Ireland’s favourite takeaways, as per the National Takeaway Awards
Here are the 6 best movies on TV this evening
QUIZ: Week 16 of JOE's 19 in 90 quickfire quiz is here
TG4 to air a documentary on Ireland's homeless crisis this evening
"Totally unacceptable." Final year students at WIT hit out after extra module added to final semester
Fine Gael and Fianna Fáil say Sinn Féin's rent-freeze proposal is unconstitutional. We asked a constitutional lawyer
Met Éireann forecasts risk of sleet and possibly snow in parts of Ireland this weekend
You may also like
1 week ago
"We wanted to get out of school as badly as possible" - Inhaler in conversation
1 month ago
Body & Soul confirms it is ending its 16-year association with Electric Picnic
1 month ago
"It’s not a very rock star life, to be honest!" - Sigrid in conversation
1 month ago
OFFICIAL: Tickets for Electric Picnic 2020 go on sale on Monday
4 months ago
JOE's Song Of The Day #833 - Inhaler 'Ice Cream Sundae'
4 months ago
Man found following disappearance at Electric Picnic
Next Page