As we all know, the streets of Bordeaux were positively thronged with Irish people last weekend - and while Paris might be the world capital of love, apparently one French woman hit it off particularly well with a young Irish fan.

We received a message from a French woman living in Bordeaux who is looking for a man she met in Le Plage nightclub last Friday night (the one from the Shane Long's On Fire video). 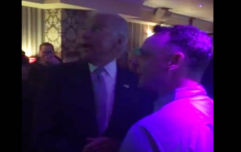 VIDEO: The Vice President of America Joe Biden watched Ireland vs Italy in a Castlebar pub

END_OF_DOCUMENT_TOKEN_TO_BE_REPLACED

She didn't manage to get many of the man's details, but what she could give us was this:

"I just know that he is tall and he had ginger hair, pretty thin, a little beard, blue eyes and his name sounds like Kevin or Kelvia, something like that, average 25-30 years old."

For her part, the girl's name is Morgane and she has dark brown hair. So if you're the man she means... Let us know and we'll get in contact with her.

popular
Budget 2023: Cigarettes going up, energy credits announced, child and social welfare increases confirmed
Two new 24-hour bus services are coming to Dublin
CONFIRMED: Renters to benefit from €500 tax credit as part of Budget 2023
An underseen disaster film is among the movies on TV tonight
Female child and woman in critical condition after incident in Clare
Female child discovered with serious injuries in Clare
Jeffrey Dahmer’s dad thinks he knows what’s to blame for son becoming a serial killer
You may also like
4 years ago
Irish football fans will be angered by 'hooligan' portrayal in Dan Brown book
5 years ago
QUIZ: How well do you actually know your Irish internationals?
6 years ago
WATCH: The FAI's montage of Ireland's Euro 2016 journey will give you goosebumps
6 years ago
VIDEO: Martin O’Neill sets off fire alarm in TV3 studios with a wicked half-volley
6 years ago
WATCH: Eamon Dunphy and Liam Brady’s tribute to Johnny Giles may well move you to tears
6 years ago
WATCH: Robbie Brady celebrating with his family the standout moment in UEFA thank you to Euro 2016 fans
Next Page