A spokesperson for Twitter issued a statement confirming the reasons behind the decision: "The account has been permanently suspended after repeated violations of our rules against hateful conduct and platform manipulation."

Linehan, who posts using the username @Glinner, is well known for co-creating comedies such as Father Ted and The IT Crowd, though in recent years he has dedicated much of his time to having arguments on the internet. 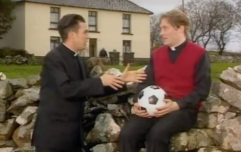 END_OF_DOCUMENT_TOKEN_TO_BE_REPLACED

Many of his tweets were directed at transgender people, or discussing transgender rights, and shortly before his ban he had replied "Men aren't women tho" to the Women's Institute, which had published a tweet wishing a happy Pride month to its transgender members.

In late 2018, West Yorkshire Police issued Linehan a "verbal harassment warning" following complaints from a trans person on Twitter who had interacted with him.

115 complaints were received by the BBC after Linehan appeared on Newsnight earlier this year to discuss what he called "parallels" between medical treatment for transgender children and the Nazi eugenics programme.

Following his suspension from Twitter, Linehan took to online forum Mumsnet with a lengthy post discussing the reasons for his ban.

The Big Reviewski || JOE · The Big Reviewski with Andy Serkis, Squid Game follow-ups & the return of Succession
popular
Nigel Farage has been saying republican phrases again, but in reality, he's the one laughing
Gardaí will be out in force pulling for speed this week
How to lower your cholesterol - 5 really handy tips
Largest aircraft in the world touches down at Shannon Airport
Ranking all of Christopher Nolan's movies from worst to best
The cast of Succession on the most ridiculously expensive scene in the show
An underrated Denzel Washington thriller is among the movies on TV tonight
You may also like
1 month ago
Derry Girls named “distinctively British” show by UK Media Minister
8 months ago
Ranking the best fights between John and Mary from Father Ted
8 months ago
Irish actress Rynagh O'Grady has died
9 months ago
QUIZ: How well do you remember Ted's Golden Cleric speech in the Father Ted Christmas special?
9 months ago
QUIZ: How well do you know the Father Ted Christmas special?
1 year ago
The Father Ted tribute to Jack Charlton deserves to be watched today
Next Page