Even the gardaí are having fun in the snow!

Storm Emma has arrived, and she is wreaking havoc on the country. We have already seen people going absolutely mad for a bit of bread, and offices and workplaces nationwide have shut down.

Meanwhile, kids everywhere are either enjoying their days off school to play in the snow, or indoors in their comfy homes. 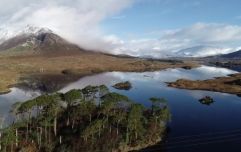 END_OF_DOCUMENT_TOKEN_TO_BE_REPLACED

But it's not just kids.

Even the most hardened criminals must be wrapped up under a blanket with some hot chocolate and some marshmallows, so the guards are entertaining themselves the best way they can.

Snow brings out the best in lots of people, and An Garda Síochána aren't going to miss out on a chance to make a top class snowman. And top class it is. We challenge you to make a better one.

On 'Snow Patrol' This one won't be 'Chasing Cars' ! Take care out there today. #staysafe #winterready #StormEmma pic.twitter.com/smkzPWGoER

It's up there with this fine effort from Wednesday...

Whoever made the Michael D snowman outside Aras an Uachtarain is an absolute legend! #sneachta #snow #snowday pic.twitter.com/ufnMLkTTUW

The Big Reviewski || JOE · The Big Reviewski with Ray Liotta, Goodfellas facts & Tom Hanks making us cry
popular
The 50 most iconic songs of all time* have been revealed
PICS: The man with the biggest penis in the world has one unbelievable problem with it
Jason Byrne forced to cancel tour dates due to a heart condition
The JOE Friday Pub Quiz: Week 262
Melissa McCarthy's most-overlooked comedy is available to watch at home this weekend
BBC reporter Phil McCann responds after going viral
The five best true crime documentaries to watch on Netflix this weekend
You may also like
6 months ago
Met Éireann says snow will fall tomorrow night before a rainy weekend
7 months ago
Status Yellow snow warning issued for six counties
7 months ago
Motorists urged to exercise caution on the roads this week due to snow and ice
7 months ago
Two men fined £10,000 each for organising snowball fight in Leeds
8 months ago
Snow and ice warning issued for 13 counties ahead of bitter weekend
8 months ago
Accumulations of snow in many areas forecast as temperatures set to drop below freezing
Next Page