The five emotional stages of a 'quick trip' to IKEA

You need to be made of the strong stuff to withstand the extremely testing nature of a trip to IKEA.

What seems like an inoffensive way to spend an afternoon can quickly descend into turmoil, with scenes closely resembling the 'This Is Fine' meme.

Often unavoidable, it's possible that a trip to IKEA can be successful, with the right amount of determination, perseverance and belief.

Simply familiarise yourself with the recognisable signs below and remember to be extremely vigilant at all times.

You can and will get through this.

There's a lot of preparation involved in this initial stage. You need to get some research together, draft a quick seven-page list of the essentials you need and get a very rough (but extremely thorough) running order ready.

You're going to have to get up early, have a good breakfast to set you up for the day, then set off before other members of the public (absolute scum) decide to join you. 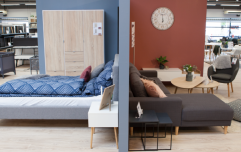 Denmark's answer to IKEA to open 15 stores around Ireland

END_OF_DOCUMENT_TOKEN_TO_BE_REPLACED

"This is fine", you mutter to yourself as you hit the motorway on what appears to be National Drive Slow Day.

When you finally arrive at IKEA drastically behind schedule, you have to remind yourself that everything is going to be okay, especially on your fifth lap of the carpark looking for a space that something slightly larger than a Tic Tac will fit into.

This is absolutely fine.

Negative thoughts begin to flood your headspace as you approach the store, thoughts such as 'this was a terrible idea' and 'why do you always punish yourself like this, you sack of shit?'

It becomes apparent that this might be a tad less problem-free than you'd expected. Not to worry, you can handle this. This is your special trip to IKEA and you're going to nail it.

Disaster strikes as you approach the entrance. The store now appears to be closed and won't open for another 45 minutes. Not to worry, at least you're here. Wait, how is the car park full when the place isn't even open yet?

No, we're not getting moody today. This is a big day, there are many accomplishments to be made, none of which involve you losing your cool. Yes, this might be turning into a very testing trip to IKEA, but you've got this.

The doors opened five minutes early and that's gotten this day right back on track. There seems to be a lot of people here that have conveniently brought 12 children each with them, so that's ideal.

It also makes perfect sense because kids love Björnklbergärns! You make a beeline for the specific areas of interest and what luck, so does everyone else.

You consult your list several times, doing your absolute best to decipher the encrypted hieroglyphic scratches you've scrawled onto the paper.

The shop is really starting to fill up, it's getting tricky to navigate the trolley around without taking a small child under the wheels.

Keep calm, positive attitude. There's a few bargains dotted around the place which proves that it probably wasn't an awful decision to come here.

Okay seriously is it national Bring Your Ugly Child To IKEA Day?

These little shits are everywhere and they're blocking the wonderful selection of Kläfgahufën. This is a fucking disaster, there's nothing on your list in stock.

The staff are too busy helping other people to tend to your precious needs and one of them looks like that arsehole teenager from next door. This is a disgrace.

The store is meticulously laid out, what if you follow the trail around but realise at the end you've forgotten something from near the entrance? There's no contingency plan, we're all going to die.

You eat your feelings in the restaurant because the food is so disgustingly cheap, eyeballing a smelly 4-year-old as your shove meatballs down your pipe, followed by a hotdog and seven slices of Daim cake.

Maybe IKEA just isn't the place for you.

Shopping is hard, but you have other strengths. You can tell who's ringing before you even look at the incoming call, you've a real knack for getting a poached egg out just in time before the yolk hardens and you can recite Pi to six decimal places.

Sure, you've failed in this particular situation, but not overall. Life is still worth living.

'Online shopping was invented for a reason', you tell yourself... You just don't need that kind of IKEA negativity in your life.

You pack up your car with the few unnecessary items you've managed to procure and don't even give a second thought to the fact that you mostly just needed some lightbulbs and completely forgot them amidst a sea of furniture and jaunty centrepieces.

IKEA has tested you, but it hasn't broken you. This was a good day.

You'll return to IKEA in six months and repeat the entire process again.


popular
The lineup for this week's Late Late Show has been revealed
QUIZ: Can you name all these European countries just from their vowels?
QUIZ: Can you guess the pixellated movie posters?
Met Éireann says there's a risk of snow for parts of Ireland this weekend
QUIZ: How many of these Recess characters can you name?
Man being treated for suspected case of coronavirus in Belfast
Star Trek: Picard mostly manages to boldly go where no Star Trek show has gone before
You may also like
1 year ago
WATCH: It looks like England fans have thrashed an IKEA after beating Sweden in the World Cup quarter-finals
1 year ago
IKEA might be coming to O'Connell Street in Dublin
1 year ago
IKEA issue recall of sweet packets due to mice infestation
1 year ago
The founder of IKEA, Ingvar Kamprad, has died, aged 91
1 year ago
IKEA are considering opening another Dublin store
2 years ago
Hundreds of customers evacuated from IKEA Dublin last night
Next Page