While a bad day for the actor, it makes for a very entertaining read.

We've all had those workdays where everything seems to go wrong.

It could be that work is hectic and you are overwhelmed. It might be that you are less prepared for the challenges the day brings than you thought. Perhaps, you make a mistake and panic.

END_OF_DOCUMENT_TOKEN_TO_BE_REPLACED

When faced with situations like this, often the best thing to do is to go with the flow, get through it and hopefully be able to laugh about it later.

In keeping with this, Irish actor Chris Newman - who people may know from shows like Love/Hate and Red Rock and the movies Song for a Raggy Boy and Here Are the Young Men - took to Twitter on Friday to recount the "worst day" of his professional life and it makes for a very funny read.

Newman shared the story, which can be read below, on the 12th anniversary of accepting the nightmare gig.

12 years ago today I accepted a job that would end up being the worst day of my professional life. (Thread) pic.twitter.com/HlpmRp8kQD

Despite not being able to speak Irish, the actor was cast in an Irish-speaking role for a TV project after learning his lines off by heart with the help of a friend that was fluent.

"Wrote it all down phonetically. Completely blagged the audition. Yes, Irish speaker is on my CV but so is horse riding and fencing. Spoof ‘til there’s proof that’s my motto," Newman wrote.

END_OF_DOCUMENT_TOKEN_TO_BE_REPLACED

However, while he had his half-a-page speech memorised, when he arrived on set he was handed a revised script.

"Now when I say the script was COMPLETELY different, if I spoke the language I’m sure it was just a slight rewording. But to me, the spoofer, they were just random words I didn’t know how to pronounce in a random order. And there was half a page of them," he said.

"One solitary bead of sweat rolled down my back. The AD obviously saw the colour I’d turned and reassured me that I had a couple of hours while they set up. 'Go get some breakfast in the canteen and look it over. We have the full day.' You’re gonna need more than the day, mate.

Newman said what happened over the next eight hours is something that still leaves him "staring at the ceiling" if he thinks about it before going to sleep. 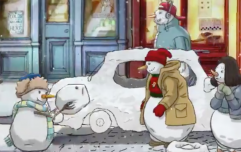 The John Lewis Christmas ad has arrived and it doesn't disappoint

END_OF_DOCUMENT_TOKEN_TO_BE_REPLACED

"If this happened to me now I’d just put my hands up and say listen I’m sorry, I can’t speak Irish and I can’t do this new dialogue," he said.

"But I was young and not as confident and I just did not know what to do. They only had this studio for one day. This was it. No time to recast. 50 crew members standing around staring at me. Take after take after take. 'Cut. Reset. Cut. Reset. Cut. Is everything ok Chris?'

"The director told me to go get some air as he went over to stand with a bunch of stressed-out producers. I was standing outside and I could see my car and I honestly thought 'run, just do it'... I knew I would never ever get this right.

"They tried cue cards. They tried taking it two lines at a time. They tried everything. I knew that this day would end eventually but at that moment I couldn’t see how. This was my life now."

Thankfully, the day did eventually end, with Newman stating he cost the project a "fortune in overtime".

However, the actor did make an appearance in the final cut, albeit with his voice dubbed over when it aired on TV, so all's well that ends well.

The Big Reviewski || JOE · The Big Reviewski with Dune, a mini-Hangover reunion & the best of Timothée Chalamet
popular
The JOE Friday Pub Quiz: Week 266
Alec Baldwin expresses "shock and sadness" over fatal film set shooting
HBO announces a new Sopranos series is in the works... kind of
QUIZ: Can you name all the countries beginning with L?
Nightclubs are now ticket-only events, according to new measures
Hunger strike ends as Nadim Hussain assured he won't be deported
Here's the line-up for tonight's episode of The Graham Norton Show
You may also like
8 hours ago
A tense and star-studded courtroom drama is among the movies on TV tonight
1 day ago
HBO announces a new Sopranos series is in the works... kind of
1 day ago
The cast of Succession on shooting the next season in Ireland
1 day ago
2021's biggest sci-fi epic and 7 more movies and shows to watch this week
1 day ago
The 10 must-watch new (and old) arrivals on Disney+ this November
1 day ago
The first trailer for the Uncharted movie has finally arrived
Next Page