Have you ever been lucky enough to stay here?

Competing against top hotels across Europe, Sandymount Hotel saw off competition from the IceHotel in Sweden, Vila Vita Parc in Portugal and Hotel Metropole Monte-Carlo in Cannes to name but a few. 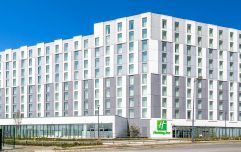 END_OF_DOCUMENT_TOKEN_TO_BE_REPLACED

The World Travel Awards was established in 1993 to acknowledge, reward and celebrate excellence across all sectors of the travel, tourism and hospitality industry. The awards are recognised globally as the ultimate hallmark of industry excellence.

Speaking at the after-party, held at the luxurious 5-star hotel Astoria St Petersburg, John and Gerard Loughran, Directors of Sandymount Hotel said: "What a privilege it is to win the title of Europe's Leading Green Hotel 2017. Over the past four years, the team at Sandymount Hotel have been part of a great transition.

"We have invested heavily in installing measures throughout the hotel to make it more environmentally friendly and we are continuously finding ways to progress. We would like to give special thanks to everyone who voted for us to win this prestigious award."

In 2013, Sandymount Hotel took an eco-friendly and sustainable approach to achieve a greener, cleaner hotel by managing its costs and reducing both its energy and water consumption.

As part of the waste prevention system, the Loughran family and green team members have reduced, reused and recycled and now has 97% of the hotels waste recycled or recovered.

The Big Reviewski || JOE · Matt Damon, Camille Cottin, Abigail Breslin and director Tom McCarthy discuss new drama Stillwater
popular
Leo Varadkar said he tried to be "extra careful" while attending Katherine Zappone's 50 person function at hotel
1,314 new cases confirmed across Ireland as total of deaths related to Covid-19 climbs to 5,044
WATCH: Matt Damon reacts to Dalkey bar creating a cocktail called The Matt Damon
Scientist says decision to go ahead with communions and confirmations could lead to "super-spreader events"
Netflix unveils its full list of classic movies arriving throughout August
Electric Picnic won't go ahead this year as Laois County Council refuse to grant licence
Met Éireann issues weather warning for entire country ahead of week of thunder and flooding
You may also like
2 days ago
Gardaí launch investigation after body discovered in Dublin park
4 days ago
People advised not to swim at popular Dublin beach due to "elevated levels" of e-coli
5 days ago
Protestors call on Temple Bar pub to "come out and say sorry" over alleged assault
1 week ago
Dublin cinema named best cinema in all of UK and Ireland
2 weeks ago
42 potential drug deals spotted in four-hour afternoon period for undercover RTÉ documentary
3 weeks ago
9 incredible Dublin outdoor dining and culture spots you need to visit this summer
Next Page