Irish restaurant named in top 100 best pizzas in the world

A hell of an achievement.

A Galway restaurant has been listed in the top 100 pizza places in the world at a prestigious awards ceremony in Naples, Italy.

The Dough Bros, located on Middle Street in Galway city, was named by 50 Top Pizza, The Guide to The Best Pizzerias in Italy and Worldwide's 2022 awards as the 79th best pizza restaurant in world.

The Dough Bros Restaurant is ran by brothers Eugene and Ronan Greaney with a team of 25, while they also operate in the beer garden of popular Galway pub, O'Connell's, on Eyre Square.

Just voted #79 Best Pizzeria in the World by @50TopPizza in Naples. Fuck the career high, this is a life high that will be hard beat. Congrats to the legend Anthony Mangieri from #unapizzanapoletana on claiming joint top spot 🍕🇮🇪💯 pic.twitter.com/EzR1Gv6nL8

It's not the first time The Dough Bros' talent has been recognised at an international level as in 2021 they made history by being named the best pizza in Europe at the 50 Top Pizza awards. 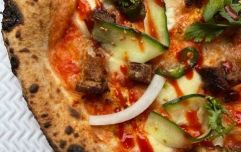 END_OF_DOCUMENT_TOKEN_TO_BE_REPLACED

"F**k the career high, this is a life high that will be hard beat," the brothers wrote on Twitter, when celebrating the new accolade.

As for the overall winner of the competition, that was shared between Anthony Mangieri of Una Pizza Napoletana in New York, USA and The Masanielli by Francesco Mantucci in Caserta, Italy.

popular
County where winning Lotto jackpot ticket worth nearly €9 million was sold confirmed
Netflix has just quietly added 30 big movies to its library
Welder awarded €15,000 for unfair dismissal despite admitting to drinking alcohol before work
Dublin Bus and boat involved in city centre collision
10 years ago today, the scariest movie ever made (according to science) was released
Netflix's new BIG scary show & 13 more new movies and shows to watch this weekend
Man hospitalised after reportedly sustaining facial injuries in stabbing incident
You may also like
2 months ago
Four Star Pizza to open 45 new stores and create 900 new jobs in Ireland
10 months ago
Apache Pizza launches biggest ever recruitment drive with 500 jobs in 180 stores
2 years ago
Two Irish spots named among the best pizzerias in Europe
2 years ago
Ranking every pizza topping from worst to best
3 years ago
A Dublin pizzeria will pay you €500 if you can devour this absolute monster in just over 30 minutes
3 years ago
The 10 most ordered pizzas in Ireland have been revealed
Next Page