We can't help but feel like he's clutching at straws here...

Jamie Bryson, a self-professed "Unionist activist and Brexiteer" has taken issue with a bag used by the sports fashion store JD, as it has the green, white and orange of a tricolour on it.

Bryson took to Twitter to voice his complaints, where he asked what would happen if they started handing out red, white and blue bags.

New JD Sports bags which I have been told are being used in the Abbey Centre store. Imagine they were handing out red, white & blue bags? pic.twitter.com/GMQKv6h0T6

Although plenty of people were keen to point out the fact that Tesco do already have the bags he discusses... 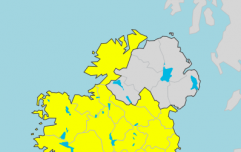 END_OF_DOCUMENT_TOKEN_TO_BE_REPLACED

He has also written an opinion piece about what he is referring to as "Bag-gate", saying that it "neatly undermines nationalism’s own more extreme grievance narratives".

This isn't the first time that Bryson has attracted some criticism for something he has said online.

He is the same guy that, during the Republic of Ireland vs Northern Ireland football game in November, mistook a Munster flag for a flag bearing the likeness of a man in a balaclava — hearkening back to old IRA imagery.

The less said about that incident the better.

House of Rugby Ireland · Munster can't beat Leinster, Six Nations squad and John Cooney interview
popular
Holly Willoughby criticises influencer for travelling to Dubai during pandemic
Vials of Covid vaccine in Louth and Meath area dumped as they weren't stored properly
Here are the best movies on TV tonight
QUIZ: Can you name all of these countries just from one of their cities?
New Zealand set to close its borders for the entirety of 2021
Lidl to open six new stores and create 1,200 jobs in Ireland over the next year
Leo Varadkar says if Ireland introduced mandatory hotel quarantine, it would have to do so for a year
You may also like
1 day ago
Arlene Foster says Northern Ireland testing "massively more advanced than" in Republic
1 day ago
Northern Ireland Department of Health calls out Taoiseach's "wholly incorrect" comments about testing for UK variant
1 week ago
CMOs in Ireland and Northern Ireland release joint statement over worsening Covid-19 situation
2 weeks ago
Police issue warning over Covid vaccine scam in Northern Ireland
1 month ago
Tánaiste says there will be no road blocks on border during new Covid restrictions
2 months ago
Belfast Telegraph journalist warned of threat against them from loyalist paramilitaries
Next Page