According to French fashion label A.P.C. (who collaborated on the ‘design’ with Kanye) the product was a phenomenal two years in the making before all parties settled on the incredibly imaginative design that you see below: END_OF_DOCUMENT_TOKEN_TO_BE_REPLACED

It seems to JOE that Mr Kardashian could well be the smartest man on the planet as the extortionate t-shirt has already sold out, despite having only gone on sale this week.

It really is the perfect case of The Emperor’s Shit New Clothes.

One man, according to uproxx, was rightly so incensed by the rapper’s move, that he wrote the perfect, hilarious review in response to the sale. The rant even has a SpongeBob SquarePants reference. Brilliant: For an excellent, cheap, Irish alternative, look no further than our very own Dunnes Stores. They’re selling a pretty much identical product for the slightly more reasonable price of €3-€5. 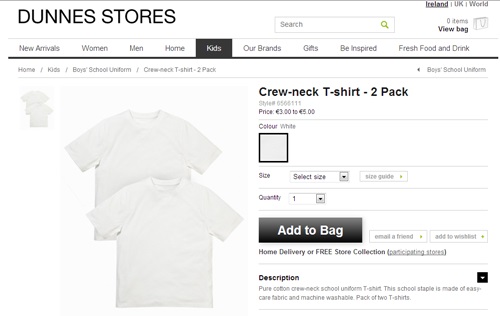 The Big Reviewski || JOE · TBR Spotlight: Loki - Episode Two - 'The Variant'
popular
Dominic Cummings reveals "texts from Boris" calling Matt Hancock "f**king hopeless"
Public warning issued as large male boar is on the loose in Kerry
329 new cases of Covid-19 have been reported in Ireland
Ryanair takes delivery of its first "Gamechanger" aircraft
Electric Picnic organisers announce new dates for summer festival
Richard Madeley goes full Partridge with Hitler Youth reference on Good Morning Britain
Piers Morgan hits out at Ikea as it becomes latest brand to pull advertising on GB News
You may also like
1 month ago
Shrek fan notices X-rated Easter egg that we all missed as kids
4 months ago
"I am not a cat" - Texas lawyer turns on kitten filter during court Zoom, and can't switch it off
1 year ago
25 of the funniest tweets you might have missed in October
1 year ago
WATCH: RTÉ raised their game with their Halloween reporting on Thursday
1 year ago
PIC: Man discovers 1998 Spanish article naming part of Cork the most sexually repressed place in the world
1 year ago
Personality Test: What percent clown are you?
Next Page