LISTEN: John Waters storms out of interview with Eamon Dunphy

He called Dunphy a "fucking bollocks."

Irish writer John Waters, who is campaigning for a No vote in Ireland's referendum on the Eighth Amendment, appeared to walk out of an interview with Eamon Dunphy in a clip published by The Stand podcast Souncloud account today.

The discussion grew heated as Dunphy asked Waters for his thoughts on the morning-after pill, and the question of when life begins. 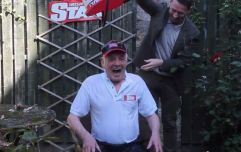 Video: Eamon Dunphy does the Ice Bucket Challenge so Glenn Whelan has to give €6,000 to Dublin Hospital

END_OF_DOCUMENT_TOKEN_TO_BE_REPLACED

"This is typical of the media attempt to turn this into something else," Waters argued. "These are extraordinary philosophical questions... These are angels dancing on the head of a pin when there are tanks coming down the main street."

Dunphy responded by saying "You're trying to bully me now." When Dunphy tried to further expand on his argument, Waters called time on the discussion.

"We have 40 minutes to do an interview about this, so can we talk about the issue or else I'm going home." Waters quickly went on to say, "I'm fed up of this, listen. You told me this would be a fair interview, this is not a fair interview. You're a bollocks, you're a fucking bollocks. You can fuck off, Eamon."

Waters finished by saying "Talk to Una Mullaly, fuck off," referring to Dunphy's guest for the Yes edition of the podcast, Irish Times writer Una Mullaly. 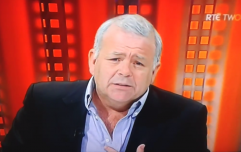 END_OF_DOCUMENT_TOKEN_TO_BE_REPLACED

Throughout all this, Dunphy pleaded his case with Waters and said that he is himself a "No voter."

Dunphy has explained his decision to publish the interview with Waters, saying: "Okay folks, that's what happened. It's very unfortunate and I'm very sad about it. It was the intention to have somebody representing the No side and to balance that with somebody, Una Mullaly, and Irish Times journalist, representing the Yes side. So, the No side have disappeared and people can... I'm glad we played it out because people can make their own mind up about what occurred."

Both interviews can be heard in full below.

popular
Amazon Prime Video has just added 38 very big movies to its library
Mia Khalifa claims seaside town is better than Miami
Ashton Kutcher opens up about rare disease that left him unable to see or walk
We just got the first trailer for a movie not out until 2024
The 50 most iconic songs of all time* have been revealed
The Pogues’ Shane MacGowan rushed to hospital
The start of the superhero takeover of Hollywood is among the movies on TV tonight
You may also like
2 weeks ago
Here's the line-up for this week's Late Late Show, which will include a Vicky Phelan tribute
3 years ago
Eamon Dunphy explains why he is a lifelong Liverpool fan
3 years ago
Eamon Dunphy: If you don't fit their favoured demographic, then the government don't give a f**k
3 years ago
Eamon Dunphy accuses Leo Varadkar of playing to the 'Green Gallery' over Brexit
4 years ago
Eamon Dunphy is returning to our TV screens in a new series about famous Irish sporting icons
4 years ago
"Sick commentary, racist commentary" - Love/Hate creator hits out at critics of new show Taken Down
Next Page