Not just Ireland, as a huge fine will be issued if they're sold anywhere in Europe.

A court ruling in The Hague has ruled in favour on a Dutch clothing company, which has essentially stopped the McGregor Sportswear line from being able to be sold in Europe.

A few months ago, The Sun reported that Ireland based McGregor Sports Entertainment applied to the European Trade Mark office to register Conor McGregor’s trademark on sports clothing. 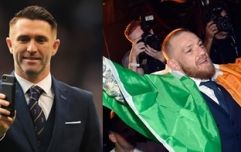 END_OF_DOCUMENT_TOKEN_TO_BE_REPLACED

The Dutch company, also named McGregor, brought the copyright issue to court, claiming that the branding on the McGregor Sportswear line - run under the Reebok banner, which is owned by parent company Adidas - was too similar to their own.

According to The Independent, the Dutch company's lawyer said: "The public would be confused into believing that the clothing made by Reebok for the Irish mixed martial artist and boxer comes from the McGregor fashion house.

"We asked Reebok to stop selling the clothing that would confuse the public but they refused", adding that it "was bound to be confusing to the public because it has McGregor in huge letters while 'Conor' is so miniscule you hardly see it'."

The ruling has called for all Conor McGregor Sportswear items be removed from stores from all over Europe within the next seven days.

popular
A terrific crime thriller is among the movies on TV tonight
One of Keanu Reeves' best movies has just been added to Netflix
Daniel Craig's best pre-James Bond film is among the movies on TV tonight
The JOE Movie Quiz: Week 131
QUIZ: Can you get full marks in this General Knowledge Quiz?
QUIZ: Do you reckon you can get 15/15 in this General Knowledge Quiz
The 50 most iconic songs of all time* have been revealed
You may also like
2 years ago
Notorious is just another cog in Conor McGregor's money-making machine
3 years ago
Conor McGregor and Khabib Nurmagomedov both suspended following brawl at UFC 229
3 years ago
McGregor's comeback fight is already being mooted as the biggest record-breaker in UFC history
3 years ago
Floyd Mayweather's response to McGregor's recent controversy is hugely hypocritical
3 years ago
Images of McGregor's team members were posted around UFC 223 with the words "Access Denied"
3 years ago
WATCH: Latest HD footage from bus attack shows full extent of McGregor's carnage
Next Page