"Hey Vince - how about throwing this sorry son of a bitch out of our Hall of Fame?"

On Wednesday, Foley tweeted a message to his former boss, telling him to throw "this sorry son of a bitch out of our Hall of Fame".

Hey Vince - how about throwing this sorry son of a bitch out of our Hall of Fame?@VinceMcMahon

END_OF_DOCUMENT_TOKEN_TO_BE_REPLACED

Donald Trump was inducted into the WWE Hall of Fame in 2013. The President has had a long history with pro wrestling, most famously appearing at Wrestlemania 23 in 2007.

As part of the "Battle of the Billionaires" he ended up shaving Vince McMahon's head alongside Stone Cold Steve Austin and Bobby Lashley.

END_OF_DOCUMENT_TOKEN_TO_BE_REPLACED

In 2009, he appeared as part of a storyline where he (in kayfabe) bought WWE Raw, before selling it back to Vince soon after.

He also made appearances at WrestleManias IV and V, which were billed as being from Trump Towers, but actually took place at the nearby Atlantic City Convention Hall. 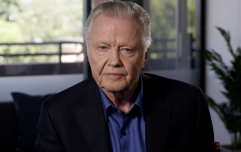 END_OF_DOCUMENT_TOKEN_TO_BE_REPLACED

In 2016, following his election to office, Trump appointed Vince's wife Linda McMahon to his Cabinet, as Administrator of the Small Business Administration.

In 2017, Vince, Linda, their children Stephanie and Shane, and Triple H all visited Trump in the Oval Office.

“Stone Cold” Steve Austin has stunned 46 percent of the people in this photo, including the president. pic.twitter.com/GKkz0cjB5d

This is not the first time Mick Foley has spoken out against Donald Trump, having frequently criticised him on Twitter.

Mr President, we have a testing problem. Can you please take 33 seconds out of your busy day to watch my video?

popular
Ashton Kutcher opens up about rare disease that left him unable to see or walk
Amazon Prime Video has just added 38 very big movies to its library
The Pogues’ Shane MacGowan rushed to hospital
Rotten Tomatoes reveals the best reviewed movie of 2022
Matthew Perry can't rewatch any of Friends for heartbreaking reason
Lady Gaga's dognapper sentenced to 21 years in jail
The start of the superhero takeover of Hollywood is among the movies on TV tonight
You may also like
2 weeks ago
Donald Trump Twitter ban lifted thanks to a very stupid reason
2 weeks ago
QUIZ: JOE's Big News Of The Day Quiz #13
2 weeks ago
Donald Trump said lots of Donald Trump things as he announced new president run for 2024
2 months ago
Donald Trump mocks Joe Biden for sitting 14 rows back at Queen Elizabeth's funeral
3 months ago
Alec Baldwin feared Trump supporters would kill him after Rust shooting incident
3 months ago
Donald Trump says FBI agents 'raided' his Mar-a-Lago Florida home
Next Page