NASA has shared an amazing 360-degree photo taken by the Curiosity Rover on Mars.

The rover has been on the red planet for six years, and the image shows a thin layer of crimson dust on the vehicle.

Take a look at a 360º panorama of Vera Rubin Ridge on Mars, taken as the @MarsCuriosity rover surveyed its surroundings on the Red Planet during the fading global dust storm. Included is a view of the rover itself, revealing a thin layer of dust on it: https://t.co/mbNpnAUrGI pic.twitter.com/HQcmcCAnhi

The image was taken on 8 August when, after collecting a new rock sample on Vera Rubin Ridge, the rover celebrated by taking a quick snap on its surroundings.

Dust in the wind... and on my deck. Explore the surface of #Mars with me in this new #360video. Best in @YouTube app: https://t.co/na8oXc5Ify pic.twitter.com/8tRFu3Y2w3

NASA also uploaded an interactive version on YouTube, giving a small glimpse of what it would be like to be stood on the surface on Mars. 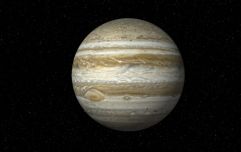 END_OF_DOCUMENT_TOKEN_TO_BE_REPLACED

The successful collection of rock samples was a particular achievement for the Curiosity Team, as their last two attempts to do so were scuppered by the drill hitting hard rock.

Even NASA team members were impressed by the variety in colour and texture in the region.

"The ridge isn't this monolithic thing -- it has two distinct sections, each of which has a variety of colors," said Ashwin Vasavada, Curiosity's project scientist at NASA's Jet Propulsion Laboratory in Pasadena, California.

"Some are visible to the eye and even more show up when we look in near-infrared, just beyond what our eyes can see. Some seem related to how hard the rocks are."

The Curosity rover was launched from Cape Canaveral on 26 November, 2011, and landed in the Aeolis Palus plain near Aeolis Mons in Gale Crater in August of the following year.

Its role is to investigate the planets' climate and geology - and in particular, find out if the Gale Crater ever had the right conditions to sustain life. It is also studying the environment in preparation for potential future manned missions to Mars.

In December 2012, the rover's two-year mission was extended indefinitely.

It is not the only NASA rover on the planet - the Opportunity is on the other side of Mars, doing similar investigations.

popular
Met Éireann issues weather warning for three counties
An underrated Jason Statham thriller is among the movies on TV tonight
QUIZ: Take your very best shot in this tough General Knowledge Quiz
The 50 most iconic songs of all time* have been revealed
QUIZ: Can you conquer this delightfully difficult General Knowledge Quiz?
The JOE Movie Quiz: Week 160
QUIZ: Can you name all of these countries just from one of their cities?
You may also like
5 months ago
The world's first orbiting film studio is scheduled to be launched into space in 2024
6 months ago
Irish scientists involved in developing the most powerful telescope ever built
7 months ago
Heinz launches Mars-grown tomato ketchup on store shelves... and into space
8 months ago
Star Trek star William Shatner to actually journey into space today
8 months ago
NASA astronaut shares amazing image of Dublin all the way from space
9 months ago
SpaceX to launch first all-civilian crew into orbit
Next Page