Parrot gets stuck on roof, tells firefighter making rescue attempt to "f**k off"

Jessie had spent three days stuck on the roof of a house in north London but still had some choice words for members of the fire service.

A parrot that got stuck on a roof in north London greeted its rescuer with a big old "fuck off" and followed it up with a number of other expletives.

Jessie, a turquoise and yellow Macaw, had been on top of the roof of a house near its home in Edmonton for three days. When neither her owners or the RSPCA were able to get her to come down the Fire Brigade had to be called in.

A member of the service scaled a ladder to reach the bird with the instructions of saying "I love you" to encourage her co-operation, only for Jessie to then hit him with the F-bomb.

Firefighters were called by the RSPCA to a pet parrot stuck on a roof in #Edmonton for three days. Read the story of the potty-mouthed parrot in Cuckoo Hall Lane as told by Watch Manager Swallow here: https://t.co/Th2nlVCq7I © @PaulWood1961 pic.twitter.com/83ykYNpLvh

London Fire Brigade (LFB) watch manager Chris Swallow, who was at the scene, said: “Jessie had been on the same roof for three days and there were concerns that she may be injured, which is why she hadn’t come down.

“Our crew manager was the willing volunteer who went up the ladder to try and bring Jessie down. We were told that to bond with the parrot, you have to tell her ‘I love you’, which is exactly what the crew manager did. 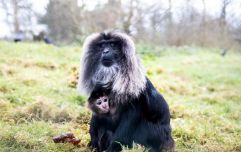 END_OF_DOCUMENT_TOKEN_TO_BE_REPLACED

“While Jessie responded ‘I love you’ back, we then discovered that she had a bit of a foul mouth and kept swearing, much to our amusement. Jessie also speaks Turkish and Greek, so we tried telling her to ‘come’ in both those languages too."

Sadly she was having none of it, flying onto another roof and then to a tree. She was then finally retrieved by her owners.

Despite the LFB-led rescue of the bird, the service reminded people that it should contact the RSPCA first over any animal rescue attempts.

A spokesperson said: "As with this incident, the RSPCA should be contacted in the first instance and we would always urge people to do the same if they see an animal stuck or in distress. If the RSPCA require our assistance, they will call us and we are happy to assist with our specialist equipment."

Advertisement
House of Rugby Ireland · Quinn Roux on finding a home in Ireland and Mike McCarthy brings the absolute HEAT!
popular
The 50 most iconic songs of all time* have been revealed
Man arrested and charged for breaching Covid regulations in Kildare
This hidden Back to the Future 'mistake' has a subtly brilliant explanation
QUIZ: Name all the countries of the EU that contain 2 vowels or less
QUIZ: Can you name the Marvel Cinematic Universe film from just a single screen shot?
Warner Bros. plan new Harry Potter movie and they want Daniel Radcliffe to star in it (Report)
QUIZ: Can you name all the teams in the NBA from their locations?
You may also like
3 weeks ago
Pedigree dog beef recalled in Ireland due to risk of illness to dogs
2 months ago
32 dogs and four horses seized by Gardaí in Dublin
3 months ago
ISPCA rescues dog found locked in a crate in the midlands
4 months ago
Wildlife in "catastrophic decline" due to human destruction, scientists warn
5 months ago
Gardaí appealing for help in trying to reunite a suspected stolen dog with its owner
6 months ago
Gardaí issue warning about dogs attacking livestock
Next Page