A number of passengers suddenly became unwell with "flu-like" symptoms.

Staff wearing masks took passengers onboard a Virgin flight from Barbados to London Gatwick into quarantine after a mid-flight outbreak of a mystery 'coughing sickness'.

A passenger on the plane, Trevor Wilson, claimed that several people onboard had experienced "flu-like symptoms" while on the flight from Bridgetown. The passengers had previously been onboard a MSC Preziosa cruise. 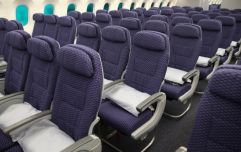 END_OF_DOCUMENT_TOKEN_TO_BE_REPLACED

Passengers were held at the airport for over an hour and a half while they underwent checks, but have now been released.

A Virgin Atlantic spokesperson said: "A number of customers onboard the VS610, which landed at London Gatwick this morning (March 6th) from Barbados, reported feeling unwell.

"As a precaution, the plane was met by the relevant authorities who made the decision to screen everyone onboard, in line with standard health and safety procedures.

"The wellbeing of our customers and crew is always our priority, and we are supporting those affected.

"Customers have now left the aircraft and can continue their journeys as normal."

A Gatwick spokesperson said: "A small number of passengers and crew on board a Virgin Atlantic flight which landed from Bridgetown, Barbados this morning reported feeling unwell. In keeping with health and safety procedures, the relevant authorities were informed and an assessment was taken on board.

"Passengers have now been able to leave the aircraft and continue their onward journeys."

House of Rugby Ireland · Munster's nail-biting win, European games in doubt and Darren Cave interview
popular
QUIZ: Can you name the Marvel Cinematic Universe film from just a single screen shot?
QUIZ: Can you pass your driving test and guess the meaning of all these road signs?
QUIZ: Can you correctly identify these European country flags?
The JOE Movie Quiz: Week 85
The JOE Friday Pub Quiz: Week 226
QUIZ: Can you recognise each of these iconic Dublin pubs?
QUIZ: Name all the countries of the EU that contain 2 vowels or less
You may also like
1 year ago
SAS flight accidentally lands in wrong city in Italy
1 year ago
Body recovered from wreckage of plane carrying Emiliano Sala
2 years ago
Plane makes emergency landing in Dublin Airport due to cracked windscreen
3 years ago
Plane forced to make emergency landing after taking off from Belfast
3 years ago
Plane crashes near supermarket in Portugal, killing all on board
4 years ago
Man kicked off plane for taking pictures of air hostess's bum at Dublin airport
Next Page