PIC: Some amount of drinking was done in Tipperary judging by this massive keg collection

They're a thirsty bunch down in Clonmel...

We're betting there were more than a few sore heads down around The Local Bar in Clonmel if this collection of kegs is anything to go by.

The bar itself is renowned for its Guinness, which we've been reliably informed is "like soup", and they seem to get through an awful lot of the black stuff.

END_OF_DOCUMENT_TOKEN_TO_BE_REPLACED

We've seen similar numbers in pubs in other parts of the country, but it's usually when approaching St Patrick's Day or some other public holiday/big game.

Speaking to JOE, Michael Keeley, who sent in the photo said that if you tasted any of the pints in the place you'd know why they're all empty before informing us that none other than Ireland legend, Niall Quinn, used to have a share in the business. 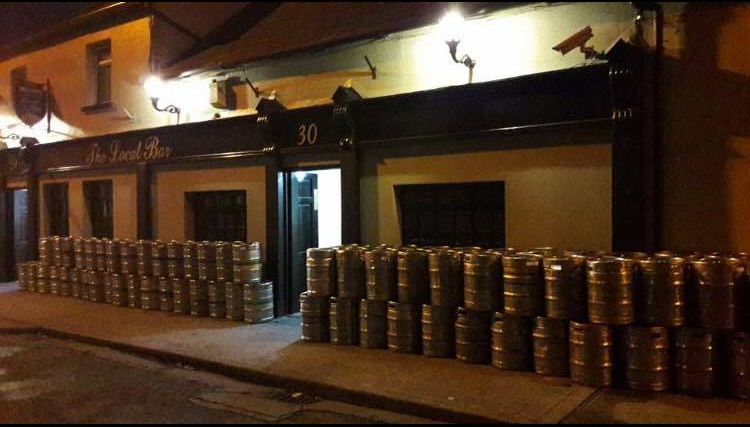 This lot were left out on Monday night for collection, and we're sure the locals will have a great time trying to empty the replacements.

Now, it's not quite as impressive as this effort from an Irish bar at the Euro's last year, but it's pretty damn close.

We're sure that Ma Nolan's in Nice didn't have any difficulty getting rid of this delivery.

Cheers to Michael Keeley for sending this our way.
Got a story for JOE? Hit us up on Facebook or Twitter, send it to our WhatsApp number 087-4001102 or mail editorial@JOE.ie.

popular
Amazon Prime Video has just quietly added 15 big movies to its library
QUIZ: Can you guess the pixelated album cover?
An unforgettable sci-fi film is among the movies on TV tonight
Irish man dies following hit-and-run in London
Travis Barker rushed to hospital after tweeting "God save me"
Gardaí issue update on investigation into murder of Sophie Toscan du Plantier
Calls for €20 social welfare increase and minimum wage of €13 in new Budget
You may also like
3 weeks ago
Johnny Depp case: Man who went viral on TikTok claiming to be a juror admits it was a 'prank'
3 months ago
WATCH: Russian soldier loses fight against door
5 months ago
Video shows Taiwanese army practicing urban warfare in front of mock Dublin pub
8 months ago
Make "No Bones" about it - this dog has taken over TikTok
9 months ago
"Only in Dublin" - Viral clip sees three men remove sofa from window with sweeping brushes
9 months ago
Clothing store selling €85 costume inspired by viral Bernie Sanders meme
Next Page