PIC: This optical illusion is driving the internet crazy

How many dots can you see?

We've not had a brain teaser annoy us for a while and the last big one we can remember is the whole shenanigans surrounding the colour changing dress debacle.

We're not going to go back into that debate right now... 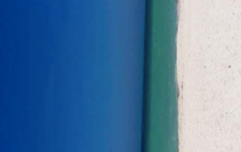 PICS: The internet is talking about this photo, and no one is sure of anything

END_OF_DOCUMENT_TOKEN_TO_BE_REPLACED

The latest craze is this picture of an intersection of grey lines on a white background, with 12 black dots in various places where the lines meet.

All 12 dots are on the picture but the vast majority of people are unable to see them at the same time because your eyes' stimulated light receptors can sometimes influence the ones next to them. This confuses them and creates the illusion of the dots appearing and disappearing.

There are twelve black dots at the intersections in this image. Your brain won’t let you see them all at once. pic.twitter.com/ig6P980LOT

So the real question is, how many dots can you see at once?

Also, are you clever enough to solve this brain teaser?

popular
Jackass star Bam Margera reportedly hospitalised with pneumonia and put on ventilator
The JOE Friday Pub Quiz: Week 324
The "eighth best movie ever made" is among the movies on TV tonight
A Place In The Sun's Jonnie Irwin takes son to see Santa after terminal cancer diagnosis
Irish woman selected for first civilian mission around the Moon
The start of the superhero takeover of Hollywood is among the movies on TV tonight
Mia Khalifa claims seaside town is better than Miami
You may also like
4 years ago
QUIZ: Are you clever enough to solve these three fiendishly difficult brain teasers?
5 years ago
QUIZ: Can you solve these fiendishly difficult brain teasers?
5 years ago
PIC: This Mayo farm needs some help identifying a mystery farming tool they found
5 years ago
WATCH: This simple GIF has been causing a lot of headaches online
5 years ago
PIC: Are you clever enough to solve this fiendishly difficult brain teaser?
6 years ago
WATCH: This is why you can never trust your eyes to show you the truth
Next Page