Watching Bambi at any time feels like emotional punishment, so it seems only fitting that a poacher has been ordered to watch the harrowing Disney movie as part of his sentencing.

29-year-old David Homer Berry from Missouri was among a group of poachers who were found guilty of killing hundreds of deer illegally in what is being described as one of the biggest poaching cases ever in the state. 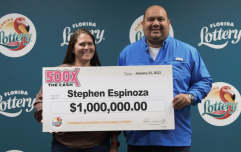 END_OF_DOCUMENT_TOKEN_TO_BE_REPLACED

The men were found guilty of hunting out of season, using illegal hunting equipment, and killing the deer while driving in their vehicle.

Berry was sentenced to one year in prison, but part of his sentencing passed down by County Judge Robert E Greene is to watch Bambi once a month, every month, for as long as he is in prison.

The 1942 Disney classic has the ability to turn just about every viewer into an emotional, blubbering mess, so we're very curious to see what Berry's reactions are once his time is served.

Because we're not monsters, we're not going to show you the waterworks-inducing hunting scene itself, so instead we'll go with this cute scene where Bambi tries to walk on ice...

popular
Harvard study reveals how many times men should ejaculate each month to stay healthy
Colin Farrell shouldn't win the Oscar this year
Forspoken breaks the golden rule of gaming... and not in a good way
Conor Mcgregor hit by car ‘at full speed’ while cycling
The 50 most iconic songs of all time* have been revealed
Netflix has just added one of the best sci-fi movies of recent years
Parents left in shock after gorillas start mating in front of kids at zoo
You may also like
1 day ago
Man shot dead after firing a rifle and pointing laser at police helicopter
2 weeks ago
Police officers sacked after having sex with each other while on duty
3 weeks ago
Jeremy Renner out of surgery but still in critical condition after snowploughing accident
1 month ago
'America's Unknown Child' identified solving mystery after 65 years
1 month ago
Man dies after falling into wood chipper outside Christmas lights display
2 months ago
Multiple people killed following shooting at American supermarket
Next Page