A major change could be on the way to the Catholic Church.

A number of Catholic bishops from all around the world are meeting at the Vatican to discuss the future of the Church in the Amazon, in a meeting that will largely focus on climate change.

But what is perhaps most notable about the meeting is the fact that the topic of married priests will be discussed. 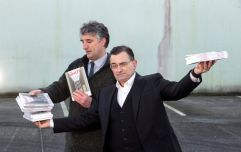 END_OF_DOCUMENT_TOKEN_TO_BE_REPLACED

The meeting will deal with the question of whether some married elder men could be ordained to help overcome a shortage of priests in remote areas in the Amazon region.

If it were to be approved, it would be a first for the Catholic church, as married men are currently unable to enter the priesthood.

The men would have to be "particularly well-respected", and they would preferably come from the indigenous communities where they intend to work.

Professor Gregory Ryan spoke to the BBC about the situation, going into detail about the lack of priests in the area.

He said: "Pope Francis, coming from Latin America, has an instinctive understanding of some of the challenges of that region."

"The concern of how thinly priests are spread in the Amazon region is really the fundamental thing at the root of this. It is tied in with the very strong Catholic sense that the Eucharist is at the heart of regular Christian community."

The Big Reviewski || JOE · The Big Reviewski with Dune, a mini-Hangover reunion & the best of Timothée Chalamet
popular
One of the best thrillers of the decade is among the movies on TV tonight
The full list of all the new shows and movies coming to Netflix in November
Vin Diesel walked Paul Walker's daughter down the aisle
The JOE Movie Quiz: Week 125
QUIZ: Get your thinking cap on with this General Knowledge Quiz
After a decade on the run, Colombia's most wanted drug lord is finally captured
The JOE Friday Pub Quiz: Week 266
You may also like
1 month ago
"Wise man of today" Michael D Higgins praised by Pope Francis
1 year ago
The Pope wants you to put the phone away for Lent and stop trolling people
1 year ago
Pope Francis apologises after slapping the hand of a woman who grabbed him
2 years ago
Pope Francis agrees to change the 'Our Father' prayer
2 years ago
Pope Francis: "Those who build walls will become prisoners of the walls they put up"
2 years ago
Pope Francis' latest tweet about the Virgin Mary is really something else
Next Page