If you ask us, the world hasn't adequately thanked Ireland for coming up with Halloween. Without our ancient Samhain celebrations, children around the world would be deprived a chance to dunk their heads in bowls of water in search of apples or consume enough sweets to fill up the boot of a car.

To celebrate the fact that Halloween is rooted in ancient Irish traditions, this year will see the Púca Festival take place across Ireland's Ancient East. There's an action-packed schedule to look forward to, it's going to be an incredibly unique way to celebrate Halloween.

It's taking place from Thursday, 31 October and running until Saturday, 2 November. While several of the events are free, you can also buy tickets online to the exclusive live music performances and art shows taking place in unique and historic locations across both counties of Louth and Meath.

Each of the three festival hubs will offer something different, but each will celebrate the origin of the now-global traditions of Halloween. We're talking live music, ancient castles being lit up with live light displays, and recreations of ancient pagan rituals. 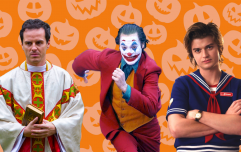 What your 2019 Halloween costume says about you

END_OF_DOCUMENT_TOKEN_TO_BE_REPLACED

It's not all about the spooky side of things though. Some of the music acts that'll be performing include Lisa O’Neill, David Keenan, DJ KORMAC, and Jerry Fish.

Expect to hear a lot more news about the festival as we get closer to the date. Now if you'll excuse us, we've got to start thinking about what Halloween costume we want to wear this year.


Hit play for The Architects of Business


popular
The JOE Friday Pub Quiz: Week 174
Paddy Holohan has been suspended from Sinn Féin with immediate effect
Paddy Holohan has been suspended from Sinn Féin over his claims that "scum" underage girls were having sex with men and blackmailing them
Here are the 8 best movies on TV this Friday
Met Éireann has issued an ice and low temperature warning for 17 counties
QUIZ: How many of these Disney Channel TV shows can you name?
Leo Varadkar hurries away from questions about "corporations and parasite landlords" on campaign trail