We've all had these conversations that we tried to end in as polite a way as possible, and even though you've received one of the following replies yourself that sent your brain into a shame spiral, you can't help yourself, and you do it yourself, like a passive-aggressive version of the tape from The Ring.

Either that, or you actually want the other person to know that you actively have zero-to-negative amounts of interest in maintaining this conversation, in which case we'd almost recommend this as a handy guide in how to get people to stop talking to you. 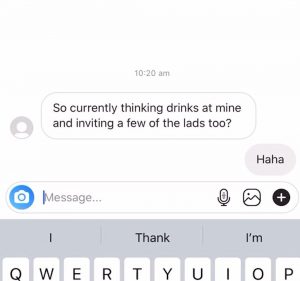 END_OF_DOCUMENT_TOKEN_TO_BE_REPLACED

We all know by now that nobody who has ever written "Haha" was actually laughing when they wrote it. Nobody has ever laughed-out-loud when they sent a LOL. But at least LOL has a bit of playful energy about it. "Haha" automatically has a sarcastic energy about it. A few more ha's at the end would make it friendlier. But "Haha" is inherently more passive aggressive than even a single "Ha". If they "Haha" you, they DO NOT find you funny. They don't want to be talking to you right now. Or perhaps ever again. 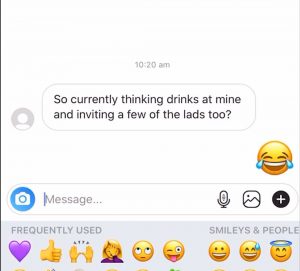 END_OF_DOCUMENT_TOKEN_TO_BE_REPLACED

Again, in accurate portrayal of emotion. How many times in your day-to-day life have you seen someone legit cry from laughing? But if we were to trust the emoji count, we'd need to be stocking up on Lucozades to help fight the dehydration caused by the constantly streaming tears of laughter. Again, you're not funny, and whoever replied to you couldn't be bothered even typing out "Haha" to let you know that. They're not willing to engage in this conversation. They're too busy not cry-laughing to let you know that. 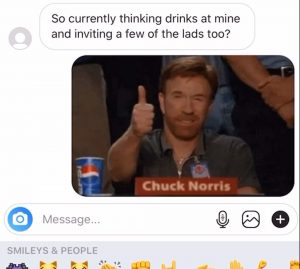 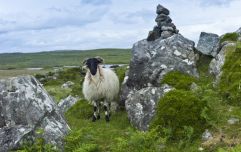 END_OF_DOCUMENT_TOKEN_TO_BE_REPLACED

Okay, so, this is actually a little bit of a sneaky passive aggressive response. Initially, it does seem like they may have gone out of their way to track down an appropriate GIF to reply to you with. But we're here to tell you: No. No they did not do that. This GIF they've sent to you, they've probably sent to ten other people today. This is their fun way of being polite. This is a moving Thumbs Up Emoji. Don't fall for it. They hate you. 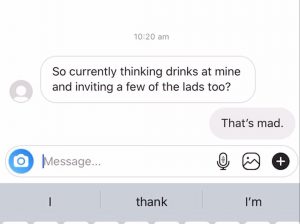 This one might be specifically Irish, but again, it feeds into the responding-with-an-emotion-they-are-not-currently-feeling. "That's mad" indicates shock, horror, surprise. But no-one who has ever actually used the sentence "That's mad" was feeling any of those things about the thing they were talking about. Double-y so in text conversations. You could be telling them about a ten-car pile-up you were involved in, or a Euro you just found down the back of the chair. They feel the same way about everything you'll ever tell them. They don't care about you. 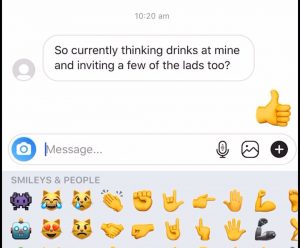 If a Thumbs Up Emoji could talk, it would be screaming at you. "Shut up! I don't want to have this conversation! Just do whatever you want! Whatever you're doing, do it, and leave me out of it! Do not involve me in this or any aspect of your life! DO YOU NOT UNDERSTAND THAT I DON'T CARE!" If you were talking to someone in real life, and they ended the conversation with a thumbs up before silently walking off, you wouldn't want to talk to that person anymore, because they are rude. Same rules apply here. 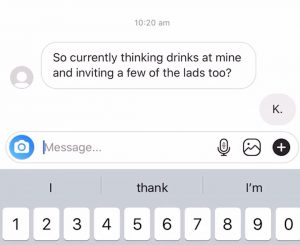 A capital "K" teeters between passive aggressive and just plain, vanilla aggressive. This person is mad at you, but not willing to talk about why. You did something. You did something bad to this person and they don't like you right now. You could continue down this path and find out what you did, you monster, but chances are they'll keep replying with single letters. Potentially, eventually, giving you all of the letters to spell out "F U C K O F F". 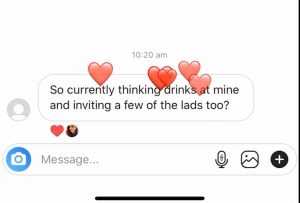 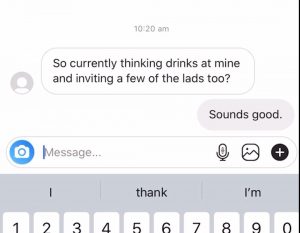 "Sounds good" doesn't sound good. Not to you, when you get that reply. And not to the person who sent it, either. Whatever you've suggested, they aren't on board. They're telling you it sounds good... for you. It does not sound good for them. They don't want to tell you that they think you're an idiot for doing what you're doing. This is like the text equivalent of a pitiful pat on the head. 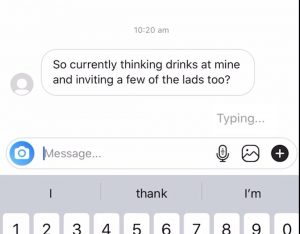 Depending on how this ends, it could be the worst thing to happen to you today. When the Typing... appears, and you're looking at it, the other person more than likely knows you can see that Typing..., because it says you're online. But then the Typing... goes away, and is replaced by... nothing. So. One of two things happened here. They got distracted by real life and forgot to finish their reply, and may come back to you later with a "Sorry, completely forgot to reply to this!" OR. In the middle of replying to you, they suddenly realised they couldn't be arsed replying to you, and just ditched the entire conversation. While. You. Were. Watching. You just don't get over something like that. 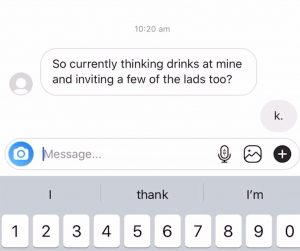 Run. Run right now. Put your phone down and run. This person is a sociopath and probably has designs on killing you. A lower case "k" combined with the full stop is text talk for pure, unadulterated hate. Rage. You've triggered this person, activated their homicidal impulses, and you need to stop talking to them forever. You don't need this kind of person in your life. Just never text them again and wait to hear about them on the news.

popular
Ryanair steward arrested after being caught on camera drinking during flight
One of 2022's funniest movies has just been added to Netflix
Leo DiCaprio's only Oscar-winning performance is among the movies on TV tonight
HSE team outlines potential symptoms of Monkeypox virus
People with many sexual partners need to watch out for monkeypox, says chief UK doctor
First photos emerge of Boris Johnson drinking at Downing Street party during lockdown
The JOE Friday Pub Quiz: Week 295
You may also like
3 months ago
30 years ago, Arnie's biggest prank ended with Stallone's biggest flop
3 months ago
China gives Fight Club a new ending, manages to completely change the plot of the movie
5 months ago
Who tweeted it: Simu Liu or Rahul Kohli?
6 months ago
Cow escapes field, heads to resort and gets stuck on water slide
7 months ago
Drunk man reported missing ends up joining search party to find himself
8 months ago
WATCH: The interview between Niall Horan and Lizzo is an absolute flirt-fest
Next Page