The statement points out that the same weather often affects counties north and south of the border, and that there would be more cohesion if Met Éireann could issue information on the six counties in Northern Ireland. 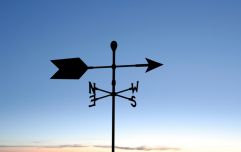 END_OF_DOCUMENT_TOKEN_TO_BE_REPLACED

“It is a cause of great frustration when the north-east of Ireland is amputated from maps that are supposed to be about alerting people to adverse or emergency weather situations.

"Weather knows no borders; neither should strategies that are meant to be about communicating the very real dangers posed by emergency weather situations."

Ó Donnghaile acknowledged that there is a distinction between the methodology and standards behind Met Éireann and its British counterpart:

"While I understand that Met Éireann and the Met Office operate two different standards in relation to weather warnings, I don't believe these competing approaches should lead to an inability to represent weather situations when/where they occur across Ireland."

As it stands, Met Éireann is the meteorological body with jurisdiction over the Republic of Ireland. When it issues a nationwide warning, for example, it is referring only to the 26 counties in the Republic. When it publishes a map, the six counties in the north are left grey.

The Republic of Ireland is currently in the midst of a snow-and-ice warning, and the Met Office in the UK has issued a similar warning for Northern Ireland.

JOE has reached out to Met Éireann for comment.

House of Rugby Ireland · Quinn Roux on finding a home in Ireland and Mike McCarthy brings the absolute HEAT!
popular
Majority of English people 'pleased' or 'not bothered' by prospect of united Ireland
The JOE Movie Quiz: Week 86
The JOE Movie Quiz: Week 85
QUIZ: The JOE Music Quiz: Week 41
Ireland adores Leitrim hurler Zak Moradi on Tommy Tiernan show
Gardaí uncover functioning shebeen in Swords
The JOE Friday Pub Quiz: Week 227
You may also like
10 hours ago
Drivers told to exercise 'extreme caution' due to "very icy conditions"
2 days ago
Snow and ice warning issued for 13 counties ahead of bitter weekend
2 days ago
Accumulations of snow in many areas forecast as temperatures set to drop below freezing
6 days ago
Status Yellow rainfall warning issued for 11 counties
1 week ago
Rain and ice warnings issued for seven counties
2 weeks ago
Weather warnings in place with temperatures expected to drop to -8
Next Page