The Suzuki Swift is a car that, despite being stuck in a particularly busy sector of the market, has enough poke and niftiness to free itself from the pack.

By Bob Flavin of www.smokerspack.com

In the days where things are tight and every last penny counts you would think that people would stop buying big things like cars. But they haven't, in fact sales have been rising all year. Just recently a new motors-related apprenticeship programme was started that will create more jobs than the government has done all year.

END_OF_DOCUMENT_TOKEN_TO_BE_REPLACED

But that's the situation with regard to new cars, in the used section there's a very healthy trade going on too. This time I want to look at the Suzuki Swift. The Swift sits in a hotly contested market segment; the big boy in the sector is the Mini but the Swift is also up against the likes of the Clio, the Yaris and the Ka just to name a few.

But just because it's a busy sector, doesn't mean that the Swift can't hold its own. It won Car of the Year in 2006, for instance.

There's a 1.3 version... and, er, that's it really. Don't let the little exterior footprint fool you into thinking that this is small inside, it will happily take four burly men on a long drive.

While there are a few cheap bits of plastic used around the cabin there's nothing really wrong with the interior, plus it's really well put together, everything still feels tight in the 2006 model I've been testing in the here and now of 2010.

On the road the ride is firm but at no point is it uncomfortable, out on the motorway it's a happy little runner. It's on the back roads where the little Swift becomes well... swift.

It's tough to explain but the short wheel base and the high revving engine means loads of fun, the handling is loose enough to allow some under and over steer but it all feels safe. You can leave bigger cars standing on twisty roads because the Swift just hangs on in there, just point the steering wheel and the car goes there.

It makes you feel like a good driver as you swoop this little car from corner to corner, dare I say it handles better than a Mini. There might be letters here but I think it's better looking than the Mini too. 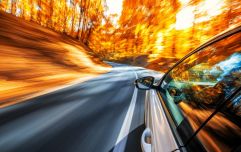 END_OF_DOCUMENT_TOKEN_TO_BE_REPLACED

There are no major faults to report, and being a Suzuki it should prove to be bullet-proof. But it's still worth checking over the whole car and check it's history with www.motorcheck.ie

This is a great car. If you need a second car, you're a first time driver or something in between you could do a lot worse than look in the Suzuki direction.

The Big Reviewski || JOE · TBR Spotlight: The Falcon and the Winter Soldier Episode Four - 'The Whole World is Watching'
popular
The JOE Music Quiz: Week 52
The JOE Friday Pub Quiz: Week 238
Thunder Force review: somebody needs to stop letting Melissa McCarthy's husband make movies
The Falcon and the Winter Soldier is on the precipice of dealing with an incredibly sensitive topic
Irish mobile network GoMo launches new €14.99 per month "for life" offer
QUIZ: Can you identify the cities of California from this list?
The JOE Movie Quiz: Week 97
You may also like
2 weeks ago
Over 170 cars clocked speeding on Irish roads in first two hours of National Slow Down Day
1 month ago
Ireland's first average speed cameras to be introduced on mainline motorways
1 month ago
Motorists warned of 'ghost broking', as 70% of drivers are unaware of the practice
1 month ago
Trade union hits out at driving tests cancelled because weather was "too cold"
2 months ago
QUIZ: How well do you know your car logos?
3 months ago
Motorist arrested for driving at 207 km/h on motorway in Kildare
Next Page