VIDEO: Skier filming movie falls over 1,000 feet and reacts like an absolute champ

It worked out better for her than it did for Larry Duff, anyway.

This JOE went skiing before and found the blue slope fairly intimidating, so watching this alone gave us the shivers.

To be fair, it did the same to professional skier Angel Collinson, who, as reported by ABC News, lost control and plunged over 1,000 feet while filming the movie, Paradise Waits, in Alaska.

Surely she broke several bones? Nah. In fact, her reaction afterwards is cool as f*ck.

Take a look at this incredible fall and even more amazing escape in this short, but oddly beautiful, clip.

Speaking after the incident, in which Collinson only suffered minor bruises, she said:

"I was skiing down pretty fast, but totally reasonable speed for what I normally do, and I hit some icy, chunky snow and it kind of bounced my ski around," Collinson said.

"This happens to us a lot but in this case it kind of bumped my ski up above me to my left and my body kept going down to my right and then that’s when I started falling."

Still, we can't help but feel that Angel got off lightly, certainly in comparison to this poor fella. 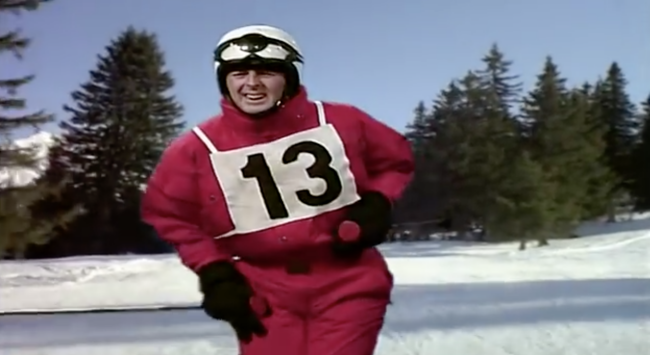 The Big Reviewski || JOE · Matt Damon, Camille Cottin, Abigail Breslin and director Tom McCarthy discuss new drama Stillwater
popular
Leo Varadkar said he tried to be "extra careful" while attending Katherine Zappone's 50 person function at hotel
Scientist says decision to go ahead with communions and confirmations could lead to "super-spreader events"
Netflix unveils its full list of classic movies arriving throughout August
Netflix has quietly added 12 great movies to its library today
1,314 new cases confirmed across Ireland as total of deaths related to Covid-19 climbs to 5,044
WATCH: Matt Damon reacts to Dalkey bar creating a cocktail called The Matt Damon
Katherine Zappone hosted 50 friends, including Leo Varadkar, at five-star Dublin hotel days before envoy appointment
You may also like
1 day ago
Ever wanted to hear Maniac 2000 sung by Christy Moore?
4 months ago
Incredible drone shot video from inside bowling alley goes viral
5 months ago
"I am not a cat" - Texas lawyer turns on kitten filter during court Zoom, and can't switch it off
1 year ago
Apostrophe Protection Society closes down, claiming "laziness has won"
1 year ago
25 of the funniest tweets you might have missed in October
1 year ago
WATCH: RTÉ raised their game with their Halloween reporting on Thursday
Next Page