Video: This just might be the most terrifying theme park ride we’ve ever seen

If you sh*t your pants after watching this, don’t say we didn’t warn you.

If you’ve been to enough theme parks and been on enough theme park rides, you’ll soon lose your capacity to be surprised by the thrills and spills in store. Don’t get us wrong, they’re still brilliant and terrifying in equal measure, but if you’ve been on one rollercoaster or one ride with a 50-foot drop, you sort of know what’s coming when you move onto the next one.

We can safely say we had no idea what was coming when we started watching the video below about the Sky Tower at Tivoli Friheden near Aarhus in Denmark, but to say we were taken aback was an understatement. 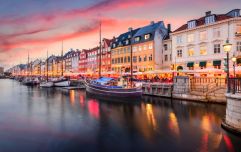 END_OF_DOCUMENT_TOKEN_TO_BE_REPLACED

Yes, that’s a 100-foot freefall into a giant mesh net you’ve just watched and if you’re anything like us in JOE Towers, your stomach is probably still tingling after watching it over and over and over again.

So, who’s up for a trip to Denmark then?

The Big Reviewski || JOE · TBR Spotlight: The Falcon and the Winter Soldier Episode Four - 'The Whole World is Watching'
popular
You can now get a life-size inflatable pub for your back garden
Female personal trainer shares the creepy messages she receives from men on social media
New walk-in Covid-19 test centres open across Ireland
The cast and director of Fast & Furious 9 discuss setting a sequel in Ireland
Dublin cyclist says he "could've died" after being pushed into ditch
What Netflix’s Seaspiracy gets wrong about fishing, according to a marine biologist
The 50 most iconic songs of all time* have been revealed
You may also like
1 year ago
Donald Trump launches attack on Danish Prime Minister, calling her comments "nasty"
2 years ago
Six people have been killed in a train crash in Denmark
2 years ago
Christian Eriksen gave a withering assessment of Ireland following Monday night's draw
2 years ago
An Irish fan in Copenhagen has been found dead ahead of Ireland's match with Denmark
2 years ago
You could cut the tension between Martin O'Neill and Slaven Bilic with a knife on ITV last night
3 years ago
FAI invite Hurricane Ophelia workers as guests of honour to tonight's crunch match
Next Page