"Thousands of Irish drivers" are paying up to €1,000 too much for car insurance

You could be one of many Irish people paying too much for their car insurance.

Thousands of Irish drivers are potentially paying up to €1,000 too much for their car insurance, according to new findings.

According to insuremycars.ie, out of the 82% of households in Ireland with one or more cars, half of these could be overpaying for car insurance.

END_OF_DOCUMENT_TOKEN_TO_BE_REPLACED

The online experts reckon that thinking there is a 'Holy Grail' to finding the cheapest insurer will never end well, as the approach each insurer takes to driver 'risk profiles' will vary hugely.

Findings by insuremycars.ie suggest that car insurance premiums are falling, so a motorist could receive his or her renewal letter and see that the premium they are being quoted today is €100 lower than what they paid last year.

But this doesn't necessarily mean that this is the cheapest possible option for motorists, and it is still worth shopping around, according to Jonathan Hehir, Managing Director of Insuremycars.ie.

"Insurers use actuaries, algorithms and a host of other mechanisms to determine pricing," Hehir said.

END_OF_DOCUMENT_TOKEN_TO_BE_REPLACED

"In the wake of much debate around dual pricing where insurers have been accused of offering higher premiums to some existing customers, it’s worthwhile pointing out to motorists that figuring out insurer’s pricing systems is nigh on impossible – some insurers favour older drivers, some favour couples, some diesel, some petrol, while others specialise in higher risk.

"There are almost 1.4million households in the country with 1 car or more – there are almost 700,000 with two cars or more. If these drivers were to review their insurance and search for better rates a renewal each household could be in line for savings of as much as €1,000."

The graph below indicates the potential savings that motorists could potentially be missing out on: 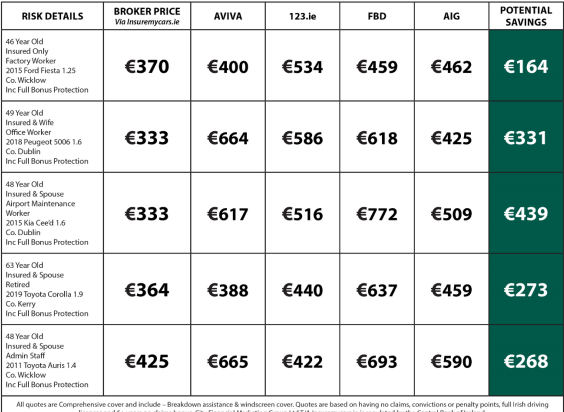