PICS: This car advert in Louth is very, very creative

Who wouldn't want to buy this?

It's probably happened to everyone at some stage, you've owned one of the worst cars imaginable, but you loved it for some unexplained reason. It was your pot of sh*te.

This JOE writer once owned a little black Citroen. The handbrake didn't work, the seats felt about as comfortable as a church pew, it had electric windows in the front but not the back and the rear doors only opened from the outside when they felt like it.

But other than that, it was an absolutely smashing car...

This seller from Louth seems to have a similar love for their car, and we have to say, we respect them for it.

But, they should have named the car, that would have made it special. 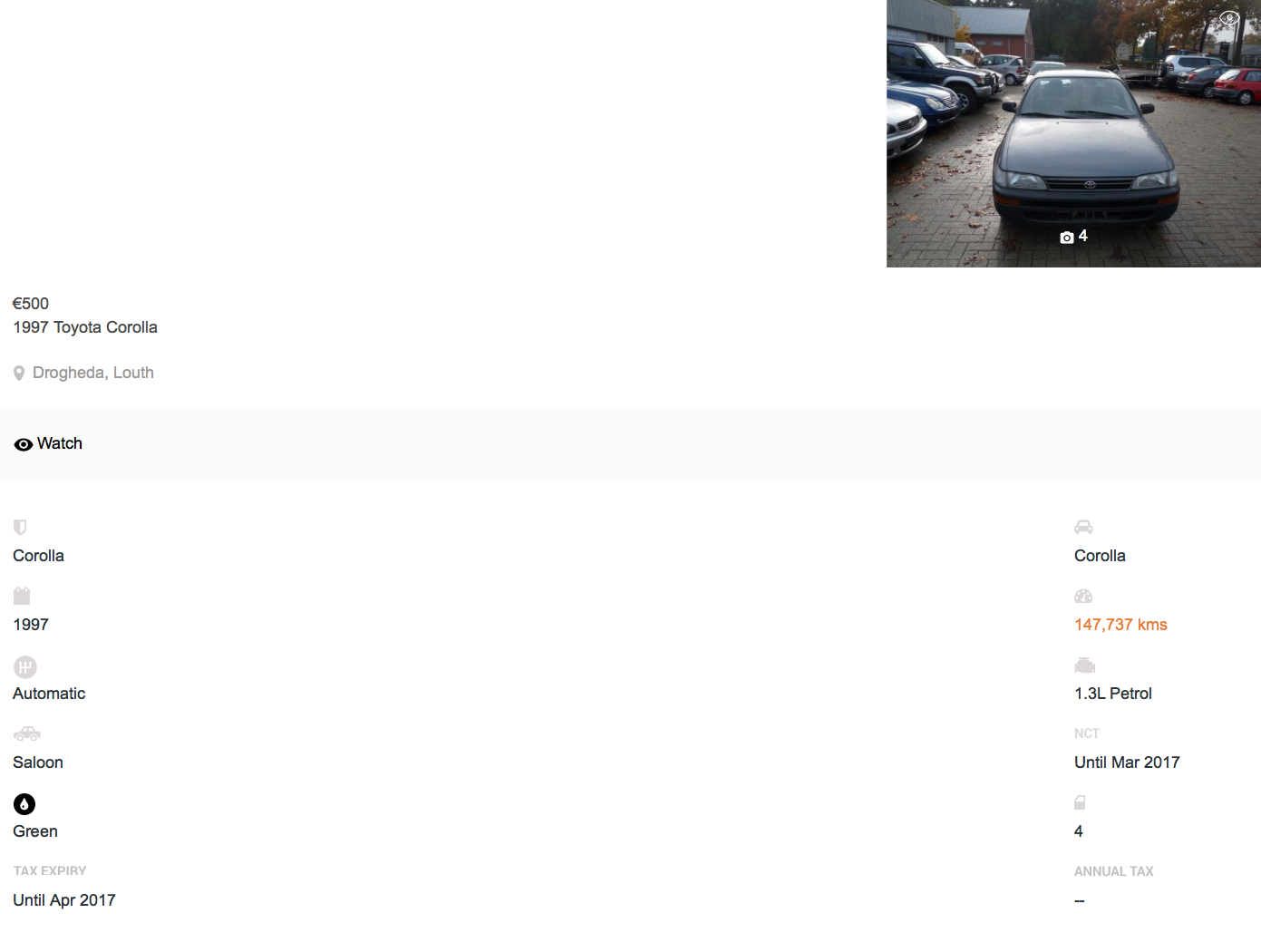 The ad reads as follows [sic]:

"This car is the ultimate winner when it comes to motoring. It is on the button and never gives up. It has driven over roundabouts, carried livestock though a Forrest and believe it or not it has the ability to drive up a wall and land on four wheels with absolutely no bumps scratches or engine damage what so ever. It doubles as a very cheap hotel room and will help you get to where you want to go and always get's you out of sticky situation's. It also has a special type of Cruz control. All you have to do is be in control while driving and block out the sound of unexplained loud noises and "sofa" style handling and you will have no problem Cruz'n along the disgraceful road's of Ireland. if you buy this car you automatically join the "state of that car club". Its an exclusive club for car owners that drive cars that dont fit in to the modern sleek 99.9% of vehicle's that curb our streets today. However when you see a member of the "state of that car club" screaming towards you at 50kph with its 90's look and sharp edges. you'll know in your hart that the person operating that car feels just a shit about there car as you do, which inadvertently makes you smile and happy for the week. It rolled out of the shop 20 years ago with 75 horse power but sadly the decades have not been kind. Although there is still plenty "go" in her yet. Its best friends are people with broken limb's as its an automatic it is a life saver with 2 foot peddles instead of 3 and as there is no need for a gear stick you have a free hand to wave at friends, shake your fist at terrible motorists and Fucking cyclists or hold hands with your woman.......or boyfriend/dog/cigarette whatever. Give me a call if you feel brave enough to handle it. €500 is a deal given its special powers.

"But an indicator and 2 shocks should be good enough. updated photos to follow soon."

How could anyone say no to a deal like that?


popular
Disney+ has brought forward its launch date in Ireland and confirmed its price
QUIZ: How many of these characters from Breaking Bad can you name?
Four people dead as China confirms Wuhan coronavirus can be transmitted by humans
QUIZ: How many of these Recess characters can you name?
Gardaí warn of phone scam that could cost consumers a "small fortune"
QUIZ: Can you name all 14 landlocked counties in Ireland?
The JOE Movie Quiz: Week 37
You may also like
3 weeks ago
21 Irish women suffered vehicle breakdowns while en route to give birth last year
1 month ago
Irish car insurance premiums up 42% despite claims falling by 40% over last 10 years
2 months ago
What is the best car from the entire history of movies?
3 months ago
QUIZ: Do you know your dashboard warning signs?
3 months ago
€4.2 million research programme into driverless vehicles launches in Ireland
4 months ago
German politicians call for SUV ban after four pedestrians killed in one incident
Next Page