The weather outside is frightful. Best stay in and watch one of these instead.

The weekend has arrived, but we're all saving money to buy each other the best presents possible, right?

And you know the best way to save some money? Watch some movies from the comfort of your couch!

Benedict Cumberbatch is Alan Turning, the genius who cracked the Germans' secret code that helped turn the tide of World War II. But his personal life may result in his accomplishments being overshadowed.

Brad Pitt finds himself in the middle of worldwide zombie outbreak, and as one of the planet's best disease scientists, he must travel the globe to find the source and potentially a cure. 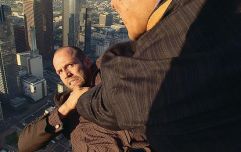 Here are the 6 best movies on TV this Thursday

END_OF_DOCUMENT_TOKEN_TO_BE_REPLACED

99% of Britain's famous actors and actresses (and Billy Bob Thornton) star in this festive romantic comedy. You already know if you love it (and will watch it again) or hate it (and won't).

Sandra Bullock is the lonely subway employee who is silently crushing on one of her regular customers, until one night he is attacked and she saves him, only to be mistaken as his girlfriend by his family while he is in a coma. And as if that wasn't enough, she actually begins to properly fall-in-love with her fake-boyfriend's brother.


popular
Ireland's best places to work for 2020 have been revealed
ISPCA rescue horse tied to electricity pole in Tipperary
Interactive infographic shows real-time spread of coronavirus outbreak
Here's Week 21 of JOE's 19 in 90 quickfire quiz
QUIZ: What movie/TV show are these fictional sports teams from?
Emirates is recruiting new cabin crew members in Galway for tax-free jobs
Six dead following mass shooting in Milwaukee
You may also like
13 hours ago
Rian Johnson says Apple won't let villains use iPhones in films
14 hours ago
Creed 3 finally happening as a new writer joins the series
14 hours ago
The hunt is on for a new Indiana Jones director
19 hours ago
Here are the 6 best movies on TV this Wednesday
1 day ago
Behind-the-scenes footage reveals more of the incredible stunts in No Time To Die
1 day ago
Netflix's new thriller The Woods will be your next TV obsession
Next Page