We're fairly certain that You won't be winning any Emmy Awards. It won't make JOE's end of year list for the best TV show of the year. It might not even make sense for any newcomer that's watching it.

What it will get is viewers. Lots and lots of viewers, and after all, isn't that what studios, directors, and actors want?

It's far from being the best show on TV, but people can't get enough of Joe (Penn Badgley) and his incredibly-creepy and psychotic-stalker ways.

With news that Season 2 of the show will be released on Stephen's Day, Entertainment Weekly have given an update on what viewers might expect.

To begin with, because the show is based on a series of books, there will be certain characters and thematic threads that are adhered to, but in terms of tone, Season 2 is going to be very much like Season 1.

“Netflix was clear they wanted us to give them a show that was like Season 1,” says showrunner Sera Gamble. “They basically said, ‘It’s not broke, don’t fix it.’ ” 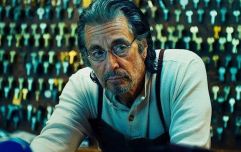 END_OF_DOCUMENT_TOKEN_TO_BE_REPLACED

In terms of the story, the new episodes are based on Caroline Kepnes’ 2016 follow-up novel Hidden Bodies. Joe is moving from New York to Los Angeles in season 2. It’s there that he’ll meet a character named Love (Victoria Pedretti) - yeah, we know.

Aside from this, Joe's ex girlfriend, Candace (Ambyr Childers), will also make an appearance.

Bring on the trash TV.

Season 2 of You is released on 26 December on Netflix.


popular
QUIZ: How well do you know Will Smith's movie career?
The JOE Friday Pub Quiz: Week 174
Met Éireann issue low temperature weather warning for 25 counties
More bad news for gamers as another two of 2020's biggest games get pushed back
Boozy holidays in the Balearic Islands will change as new laws crack down on alcohol-fuelled trips
Temperatures drop to -4 as weather warning is in place for 17 counties
QUIZ: How many of these Disney Channel TV shows can you name?
You may also like
5 hours ago
OFFICIAL: Season 3 of Killing Eve will premiere in April
1 day ago
Sky are launching a new comedy station with some excellent shows in their library
1 day ago
Three-part documentary series about the death of Jeffrey Epstein is being made
1 day ago
Here's the lineup for this week's Graham Norton Show
1 day ago
Sky to show a documentary on Denis Rader, the elusive serial killer portrayed in Mindhunter
1 day ago
Season 2 of The Night Of is a strong possibility with 'a couple of ideas' being discussed
Next Page