20 years later, is it possible for one great scene to save an otherwise terrible movie?

If only the whole movie was this good.

Following the too-dark leanings of Alien 3, as well as that movie's death of the leading character Ripley and the series retirement by lead actress Sigourney Weaver (apols for the 25 year old movie spoiler), 20th Century Fox were left with a very lucrative franchise and no idea what to do with it next. 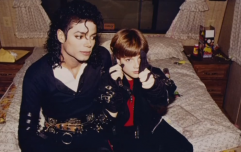 END_OF_DOCUMENT_TOKEN_TO_BE_REPLACED

Having initially offered the movie to Danny Boyle (28 Days Later, Sunshine), then Peter Jackson (The Lord Of The Rings Trilogy), then David Cronenberg (The Fly, A History Of Violence) and then Bryan Singer (X-Men, The Usual Suspects), it was eventually offered to French director Jean-Pierre Jeunet, who was hot off the success of The City Of Lost Children.

After learning their lesson of getting too involved with Alien 3 and that movie's director David Fincher, Fox gave Jeunet the total freedom to make whatever kind of movie he wanted to make. That, unfortunately, ended up being an extremely violent dark comedy, based on a script by Joss Whedon (Buffy The Vampire Slayer, The Avengers).

See, while giving Jeunet carte blache to make whatever kind of movie he wanted, they also tightened the purse strings, as Resurrection's budget of $60 million is only $5 million more than Alien 3's. This resulted in Whedon writing five different endings to the movie, all of which were eventually rejected for being too expensive, and would also explain why we got that climax involving what we like to call The Milky Bar Kid Alien. 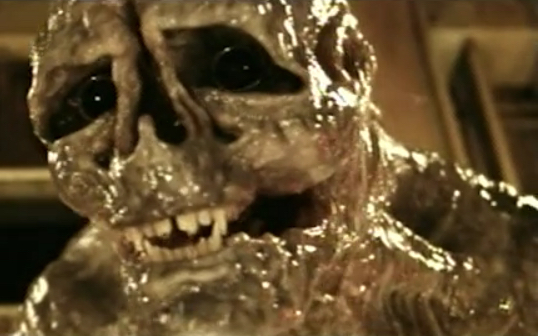 There was very little "good" about Alien Resurrection, from the clear wishful thinking that it would be the perfect mash-up of the horror of Alien and the action of Aliens, but nobody seemed to check that with Jeunet, who needed a translator on set as he spoke very little English, and clearly something was lost in that translation.

Weaver was attracted to the role of Ripley this time around because through the cloning process, she discovered that her DNA had merged slightly with the Alien's, so there was a fear that at any moment Ripley would turn on the humans and join the alien's side. (Where they got her DNA, considering she was incinerated in the last movie, is never really answered.)

This is in no way clear from the finished film, which has Ripley do little more than deliver bad one-liners ("I died!") and have heavily gelled hair. 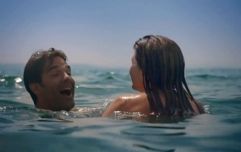 Viewers had a very emotional reaction to the finale of Catastrophe

END_OF_DOCUMENT_TOKEN_TO_BE_REPLACED

From the introduction of Winona Ryder's overly whiny sidekick to that weirdly sudden ending involving everyone arriving back at Earth despite having just blown up Australia, none of it works.

The only scene that really works is the underwater attack sequence, and it is absolutely fantastic.

About half-way through the movie, what is left of the survivors on board the spaceship, which is filled with aliens and heading back to Earth, find themselves in a bit of a pickle.

In order to get to the bridge and stop the ship from docking and letting loose all the nasties on our home planet, they have to swim through a flooded section of the ship.

So under they go, making solid progress, until they realise they're not alone... 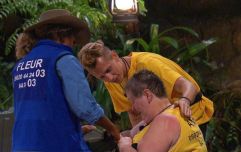 WATCH: There was a massive response to Anne's emotional arrival to the I'm A Celeb camp

END_OF_DOCUMENT_TOKEN_TO_BE_REPLACED

Everything about the scene is fantastic, from the slow build from near silence to the panicky, Jaws-esque roar of the soundtrack. The pitch-perfect sound design, especially as Ron Perlman's projectile collides with one of the creatures, combined with the unique visual of seeing the alien in a new environment, all comes together fantastically. And it is all topped off by Weaver's creepy, dead-eyed reaction to seeing one of the humans being dragged off to her doom.

When it came to filming the scene, it was the very first sequence filmed, and all of the actors and actresses involved had to be strong swimmers before they could be signed on to the production.

They all trained for months with professional divers, before being dropped into the set built at Fox Studios. The 36 by 45 meter tank was 4.5 meters deep and it contained 548,000 gallons of water (which took seven full days to fill), and milk was added to the water to make it less transparent for the cameras.

It also made it less transparent for the actors swimming in it, including Ryder - who hadn't been in water since nearly drowning at the age of 12 - and suffered an anxiety attack on the very first day of filming.

Perlman hit his head an on underwater prop, knocked himself out, and nearly died right there on set, only for the nearby film crew members bringing him to surface and bringing him around.

All in all, this one scene took three weeks to shoot.

It is a fantastic scene, lost in the wilderness of a disaster of a movie.

Whedon himself spoke out about the film in 2005, saying: "It wasn't a question of doing everything differently, although they changed the ending; it was mostly a matter of doing everything wrong. They said the lines but they said them all wrong. And they cast it wrong. And they designed it wrong. And they scored it wrong. They did everything wrong they could possibly do. That's actually a fascinating lesson in filmmaking. Because everything they did reflects back to the script or looks like something from it. And people assume that if I hated it then they'd changed the script...but it wasn't so much they changed it, they executed it in such a ghastly fashion they rendered it unwatchable."

Jeunet, meanwhile, has never returned to direct again in Hollywood, and would go on to find mega success with his 2002 movie Amelie.

The film would go on to make $160 million at the global box office (more or less exactly what Alien 3 made), and it opened at the No.2 spot, behind the Robin Williams starring sci-fi comedy dud Flubber.

Despite that, Alien Resurrection is still definitely worth a watch 20 years later, to see a great few minutes of action science fiction, surrounded by a film so bad that the company gave up hope and gave the next movie to the guy who directed Resident Evil.

popular
Large crowds gather outside Tullamore courthouse as man charged with murder of Ashling Murphy
Amazon Prime Video has quietly added 18 big releases to its library
Here's the line-up for this week's Late Late Show
60 jobs available on Stena Line with 50% of your time spent not working
WATCH: This foul-mouthed argument proves the Irish language is alive and well
Taoiseach says Covid restrictions may be eased earlier than expected
A gripping '90s thriller is among the movies on TV tonight
You may also like
3 years ago
WATCH: There has been a strong reaction to Leo Varadkar's Christmas message
3 years ago
WATCH: Mick McCarthy's reaction to Ireland initially being put into the 'Group Of Death' is perfect
3 years ago
There was a huge reaction to RTÉ documentary Whistleblower on Monday night
3 years ago
WATCH: This man's reaction to Ireland getting through to the Eurovision final is the best thing you'll see today
3 years ago
Viewers were left very angry and disappointed with the most recent episode of The Simpsons
3 years ago
Viewers couldn't get enough of Daniel O'Donnell's reaction to the cost hikes on Room To Improve
Next Page