This has been strongly foreshadowed.

As this rousing tribute video demonstrates, Jon Snow has been called many things throughout the course of Game of Thrones.

Ned Stark's bastard, the bastard of Winterfell, the Lord Commander of the Night's Watch, The White Wolf, The King in the North and most importantly, the rightful heir to the Iron Throne are just some of the titles that he has lived with.

We wonder if he'll ever be called: Aegon VII Targaryen, Seventh of his Name, King of the Andals and the Rhoynar and the First Men, Lord of the Seven Kingdoms and Protector of the Realm?

Mmm. Cersei, Daenerys and the Night King might have something to say about that.

Aside from his nobility, integrity and strength, a large reason why Game of Thrones fans absolutely adore Jon Snow is because he constantly has to prove himself while fighting for everything that he has.

Regarding his status as a bastard, Tyrion gave him the best advice by saying "Never forget what you are. The rest of the world will not. Wear it like armor, and it can never be used to hurt you."

Not only has Jon become the shield that guards the realms of men, but he's also taking the fight to the Night King.

We know that he's the living embodiment of ice and fire, but what about his incestuous relationship with Daenerys?

END_OF_DOCUMENT_TOKEN_TO_BE_REPLACED

Will Jon continue to 'keep things in the family' with his aunt, or will his stoic, noble and virtuous Northern sensibilities win out?

As we've recently seen in Game of Thrones, the issue of family and succession has been heavily foreshadowed in the most recent episodes.

When they were beyond the Wall, Jorah told Jon to keep Longclaw and pass it onto any children he may have.

Daenerys also mentions that she can't have any children after her encounter with Mirri Maz Duur at the end of Season 1. After hearing Dany's story, Jon instantly replies by saying " Has it occurred to you that she might not be a reliable source of information?"

Basically, it seems like everything is being set up for a Jonerys baby.

We're not the only people that think there might be a new Targaryen in the world.

Who's ready for and Jon and Daenerys baby next season because it's happening he just knocked her up. #GameOfThrones pic.twitter.com/4JF69aMIUA

jon is getting dany that baby and there's nothing mirri maz duur's ashes can do about it pic.twitter.com/WeskaQAnRw

If you were wondering what Jon would do in the event of this hypothetical, but very likely, scenario then this scene between Jon and Sam at Castle Black should do it.

Aside from engaging in some awkward sex talk, it's interesting to note one aspect of Jon's story.

He refused to have sex with Ros because "all I could think was - what if I got her pregnant? If she had a child, another bastard named Snow. It's not a good life for a child."

While it's great to see that Jon wouldn't be a deadbeat dad - we're looking at you Robert Baratheon and your endless list of bastards - it's also an important plot point because in Game of Thrones, bastards are not allowed to inherit their father's lands or titles. Bastards also have no claims to the privileges of their father's House. 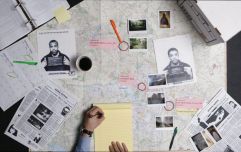 END_OF_DOCUMENT_TOKEN_TO_BE_REPLACED

It's entirely up to their father, if he knows they exist, on how to raise or treat them.

After watching this scene, it's clear that Jon would be proud to raise his children and pass on the Targaryen name.

All we need now is for someone to actually tell Jon that he's a Targaryen and that he's currently having sex with his aunt. Where's Sam and Bran when you need them?

There's another interesting facet to this scene below, take a look at the pillar that's behind Sam and Jon as they're talking.

The letters 'R' and 'L' are carved into the stone - that's Rhaegar and Lyanna, Jon's legitimate parents.

God, you have to love Game of Thrones! There's so much foreshadowing in one scene.

Here's a closer look at the carvings on the wall.


popular
Modelling suggests Ireland may have already hit its peak for Covid-19 deaths
QUIZ: Can you name all of these characters from Love/Hate?
There's a "Super Pink Moon" tonight, the biggest and brightest moon of 2020
The ultimate UK Office quiz - Season 1
WATCH: Paul O’Connell provides the single greatest moment in the history of A Question of Sport
UK records 854 new Covid-19 deaths following deadliest day so far
The 50 most iconic songs of all time* have been revealed
You may also like
5 days ago
Here are the 8 best movies on TV this Thursday
6 days ago
QUIZ: Which Tiger King character are you?
1 week ago
Why you should be watching… Narcos: Mexico
2 weeks ago
10 of the best things to get very excited about on Disney+
2 weeks ago
Why you should be watching… Formula 1: Drive to Survive
1 week ago
5 new additions to Netflix to spend your weekend watching
Next Page