Some have criticised Paquin's lack of lines in the film.

Hey, have you seen The Irishman yet?

It's been on Netflix for almost a week now, so we'll presume that you have.

END_OF_DOCUMENT_TOKEN_TO_BE_REPLACED

If you haven't, please note that this article contains some important plot-related spoilers for Martin Scorsese's latest - and perhaps final? - crime epic.

We say 'final' mainly because The Irishman really feels like a farewell to the genre that the 77-year-old filmmaker helped to elevate and arguably redefine. The official JOE review is right here, should you want further critical musings.

There has been a lot of conversation about the picture throughout the year. Upon its release, some commentators put forward the argument that women were underserved, with Anna Paquin's character in particular emerging as an especially glaring case.

Paquin plays the adult version of Frank Sheeran's daughter Peggy, who is depicted as a mostly silent figure from an early age, reflecting her upset and indifference towards her criminal father.

The adult Peggy, as portrayed by the Oscar-winning Paquin, has similarly little to say, though her presence goes a long way to personifying Frank's guilt. Ultimately, she is his greatest loss.

Despite a lack of dialogue, Paquin plays the role perfectly. The actress herself has even responded to those suggesting her character was short-changed, taking to Twitter last month to clarify matters.

"I auditioned for the privilege of joining the incredible cast of The Irishman and I'm incredibly proud to get to be a part of this film," she noted.

Nope, nobody was doing any “ordering”. I auditioned for the privilege of joining the incredible cast of .@TheIrishmanFilm and I’m incredibly proud to get to be a part of this film. https://t.co/yx54jE4ugy

Speaking with USA Today over the weekend, De Niro addressed the issue, praising Paquin's performance in the process.

"She was very powerful and that's what it was," said De Niro. 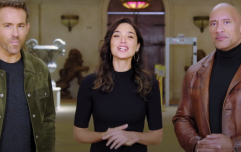 Netflix to release a brand new movie every week in 2021

END_OF_DOCUMENT_TOKEN_TO_BE_REPLACED

"Maybe in other scenes there could've been some interaction between Frank and her possibly, but that's how it was done. She's terrific and it resonates."

In related news, Martin Scorsese has expressed the wish that people tuning into The Irishman on Netflix refrain from doing so on their phones.

He's open to "a big iPad, maybe" but that's about it. Fair enough.

The Big Reviewski || JOE · Wonder Woman 1984 star Kristen Wiig & director Patty Jenkins on comedy, Cats & handsome Irishmen
popular
The JOE Friday Pub Quiz: Week 226
Recall of Pedigree dog food over safety concerns
QUIZ: Can you correctly identify these European country flags?
QUIZ: Can you recognise each of these iconic Dublin pubs?
QUIZ: Can you pass your driving test and guess the meaning of all these road signs?
QUIZ: Can you guess the drink from its can?
QUIZ: Name all the counties of Ireland that contain 3 vowels or more
You may also like
4 days ago
Netflix apologises for "unacceptable" Bloody Sunday tweet
1 week ago
Bridgerton streamed by 63 million households in record-breaking Christmas for Netflix
1 week ago
Netflix’s new true crime documentary examines one of the most infamous serial killers in US history
1 week ago
Disney+ is adding a few classic shows to its library
2 weeks ago
The full list of all the new titles coming to Netflix in January
3 weeks ago
Charile Brooker confirms new project Death to 2020 is different to Black Mirror
Next Page