The man. The myth. The legend.

This week brought a great one-two Derry Girls-themed punch in the form of both the first trailer for the upcoming second season - get that right here - and the announcement that Ardal O'Hanlon is joining the cast.

His signing makes perfect sense, given the actor's penchant for elevating comedic television (he's done a lot more than just Dougal, you know) and his range when it comes to drama, a surprising and successful element of Derry Girls' episodes to date. 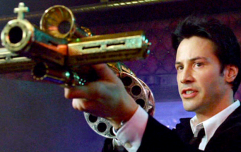 END_OF_DOCUMENT_TOKEN_TO_BE_REPLACED

As of Friday, some new details on just who O'Hanlon is playing have come to light and it sounds right in the comedian's more 'zany' wheelhouse.

Chortle report that he will step into the shoes of a man by the name of Eamonn, the "awkward, middle-aged mummy's boy" of the Quinn/McCool extended family.

Show creator Lisa McGee was among those singing O'Hanlon's praises as she welcomed him into that extended family.

"I love him, and we've worked with him before," she said.

"He just has that real unique thing that you just love watching him. He's funny and you like him, he has that likability."

As of now, there's still no official premiere date for season two, so remain patient, yeah?