Looks like they're more than friends, but not in a romantic way.

Cast your minds back to 2015, and the release of The Force Awakens.

J.J. Abrams introduced the world to a whole host of new Star Wars characters, and almost all of them went down an absolute treat.

And two of most audiences' favourite new characters were Finn and Poe, who had incredible chemistry from the second they stepped on screen together.

So much so that fans started to believe that the two could be more than friends, which was made all the more possible in a scene where Poe bit his lip, right after saying to Finn "keep my jacket, it looks better on you".

But sadly, it looks like there's no romance between the two, according to director of the upcoming Star Wars movie The Rise of Skywalker, J.J. Abrams. 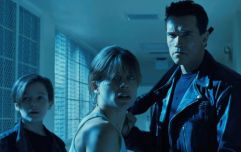 END_OF_DOCUMENT_TOKEN_TO_BE_REPLACED

Speaking to Variety, he said: "That relationship to me is a far deeper one than a romantic one.

He did allude to the possibility of a LGBTQ character featuring in the upcoming movie though, saying: "And in the case of the LGBTQ community, it was important to me that people who go to see this movie feel that they’re being represented in the film."

Star Wars: The Rise of Skywalker will hit cinemas on 19 December.


popular
QUIZ: Can you guess the pixellated movie posters?
QUIZ: Can you name all these European countries just from their vowels?
Shallow spectacle between Varadkar and Martin leaves the audience wanting less
QUIZ: Week 16 of JOE's 19 in 90 quickfire quiz is here
This week's US Powerball jackpot is a monumental €337 million, so get entering!
Dublin pub to host a 'doggy date night' where you can bring your dog to dinner
Here are Ireland’s favourite takeaways, as per the National Takeaway Awards
You may also like
4 hours ago
OFFICIAL: Captain Marvel 2 is now in the works
22 hours ago
Here are the 6 best movies on TV this evening
1 day ago
10 must-see movies at the 2020 Dublin Film Festival
1 day ago
The creators of Star Trek: Picard put to rest one of the biggest fears fans might have about the show
2 days ago
Here are the 5 best movies on TV this evening
2 days ago
Downton Abbey creator confirms plans to start work on a sequel
Next Page