The Batman has lost yet another director

Holy back to square one, Batman!

It was only a few days ago when we reported that Matt Reeves (Cloverfield, War Of The Planet Of The Apes) was in talks to take residence in the director's chair for The Batman after Ben Affleck himself vacated it, when the actor/director claimed "Performing this role demands focus, passion, and the very best performance I can give. It has become clear that I cannot do both jobs to the level they require."

Now Variety have confirmed that negotiations between Reeves and Warner Bros. have broken down, with production on the movie pushed back to later this summer. 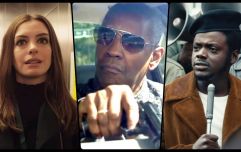 END_OF_DOCUMENT_TOKEN_TO_BE_REPLACED

On the plus side, we've got Wonder Woman arriving this June, superhero mash-up Justice League not long after in November, and Aquaman arriving October 2018, so hopefully Warners and DC can steady the ship in time before The Batman is due for release, whenever that might be.

House of Rugby Ireland · Munster and Leinster's final showdown, card crazy and Pieter-Steph du Toit interview
popular
Two Irish cities named the friendliest in Europe by leading travel magazine
RTÉ confirms Eoghan McDermott will not be returning to 2FM
Met Éireann has issued a weather warning for seven counties
Warner Bros. is releasing three big movies for home rental this week
Abercrombie & Fitch to permanently close Dublin store
Happy 25th anniversary to the best mid-movie plot twist of all time
Missing Golden Eagle's owner "worried sick" and appeals for public's help
You may also like
1 day ago
Happy 25th anniversary to the best mid-movie plot twist of all time
2 days ago
20 of the best sci-fi movies you can watch at home right now
6 days ago
Paul Mescal lands role in Irish revenge thriller Bring Them Down
6 days ago
All of the best movies and TV shows coming your way in March
1 week ago
Chadwick Boseman's wife accepts Golden Globe award on his behalf
1 week ago
Here are 36 upcoming movies and shows based on video games
Next Page