It is a scorcher out there.

But believe it or not... there's supposed to be some rain on the way. Perhaps by the time you read these words, it will be raining.

If it is, then you're probably indoors and looking for something to do. Might we suggest... some movies on TV?

END_OF_DOCUMENT_TOKEN_TO_BE_REPLACED

MORE Tom Hanks. This time in an '80s comedy about a couple who try to renovate a house, with wacky results. He's come pretty far.

END_OF_DOCUMENT_TOKEN_TO_BE_REPLACED

One of the best, but mostly, saddest films ever made. About a man with apparently supernatural powers on death row.

Remember music festivals? They used to happen in the summer but now we can't have them anymore.

Well, this documentary is about one of the biggest there is. Featuring performances from artists including Morrissey, David Bowie, Bjork, James Brown, Nick Cave, Joe Strummer, Billy Bragg, Blur and more. 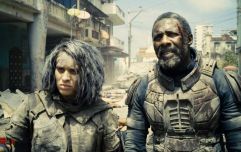 END_OF_DOCUMENT_TOKEN_TO_BE_REPLACED

A documentary about one of the most important journalists in American history, compiled of archive footage about his career and his troubled personal life.

Crowe and Ryan Gosling end up forming an unlikely in this crime comedy where they investigate the murder of a 1970s porn-star before uncovering a government conspiracy.

The Big Reviewski || JOE · TBR Spotlight: Loki - Episode Six - 'For All Time. Always.'
popular
It’s official, Irish people have one of the best chances of surviving an apocalypse
Met Éireann issues weather warning for three counties ahead of arrival of Storm Evert
Dublin cinema named best cinema in all of UK and Ireland
Gardaí investigating assault allegations after incident in Temple Bar
Michael D Higgins raises concern over having to consider high volumes of legislation in short time frames
The 50 most iconic songs of all time* have been revealed
PICS: The man with the biggest penis in the world has one unbelievable problem with it
You may also like
12 hours ago
Michael Fry to star alongside big names from Game of Thrones and Derry Girls in TV adaptation of Graham Norton novel
1 day ago
Will Smith could be an Oscar contender playing Venus and Serena Williams' father in King Richard
1 day ago
One of the best thrillers ever is among the movies on TV tonight
1 day ago
Die Hard 6 has been officially cancelled
1 day ago
The Suicide Squad review: Probably the closest we'll ever get to a Tarantino comic book movie
1 day ago
Dublin cinema named best cinema in all of UK and Ireland
Next Page