Who is the best Santa Claus ever in the history of movies?

Ho-Ho-How do we even begin to pick a favourite?

Sorry, that was terrible.

But you know what isn't terrible? The below list of the best movie versions of Santa Claus himself.

Over the years, we've seen him appear in the likes of Elf, The Polar Express, Fred Claus, Arthur Claus, The Nightmare Before Christmas, and so many more, not to mention his very own movie, imaginatively titled Santa Claus: The Movie.

It can be a tough one to answer, but if you can't answer it around Christmas time, when can you answer it??

So, always asking the difficult questions, the gang at The Big Reviewski took it on, and these are the answers they came up with, from 03:20 below: 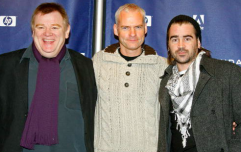 END_OF_DOCUMENT_TOKEN_TO_BE_REPLACED

As it was Justine's question, she got to answer first, and she went with Tim Allen's take on the role in The Santa Clause. This was when we found out that anybody could potentially become Santa Claus, but only if you... killed the previous Santa. Is that right? We might need to rewatch it for the details. Also, if those are the rules, how did the very first Santa Claus become Santa Clause if there was no Santa Clause...? Questions need answers!

Rory went next, and went with Alec Baldwin in the painfully underseen Rise Of The Guardians. This featured an all-star cast (Chris Pine as Jack Frost, Isla Fisher as the Tooth Fairy, Hugh Jackman as the Easter Bunny) trying to stop the evil Pitch Black (Jude Law) from taking over all of the holidays. Seriously, it is worth checking out!

And finally, because somebody had to, Eoghan went with Richard Attenborough in Miracle On 34th Street. Even though Richard has only ever starred in three movies (this, Jurassic Park, and The Great Escape - at least according to Eoghan), each and every one of them has left an indelible mark on the landscape of cinema, perhaps none more so than his take on Saint Nick.

So there you go! Tell us your favourites on Twitter or, y'know, just tell Santy himself when you're writing your letters this year.