"There is a balance to be struck in our engagements with social media."

Black Mirror: Bandersnatch is the talk of the entertainment world at the moment as the Netflix special continues to confound, confuse and consume.

JOE's Rory Cashin hailed the interactive special as "the future of TV" in his day-one review when it landed last weekend, while people have been tying themselves in knots trying to get all the endings.

END_OF_DOCUMENT_TOKEN_TO_BE_REPLACED

You can even play one of the games if you're up for downloading a ZS Spectrum emulator.

Of much more important note is actor Will Poulter, who played Colin Ritman in Bandersnatch (and was arguably the best part of it) and his decision to take a break from Twitter.

Citing mental health reasons, Poulter posted a note "with love" via his account, noting he is taking a step back in a bid to re-evaluate his relationship with social media.

"In light of my recent experiences, I am choosing to take a step back, of sorts, from Twitter," Pouler began.

"Before I do, I'd like to say a heartfelt thank you to everybody who has watched Bandersnatch and for their responses (whatever they may be) to the material we created. I accept all criticisms and it's been a delight to learn that so many of you enjoyed what many people worked very hard to produce!

"As we all know, there is a balance to be struck in our engagements with social media. There are positives to enjoy and inevitable negatives that are best avoided. It's a balance I have struggled with for a while now and in the interest of my mental health I feel the time has come to change my relationship with social media."

The actor - who has also appeared in The Revenant and was due to play Pennywise in the IT reboot when Cary Fukunga was still attached to the project - noted that he doesn't wish to appear unappreciative of the support he has received, nor will he walk away from his work with anti-bullying charities and will post occasionally to highlight those. 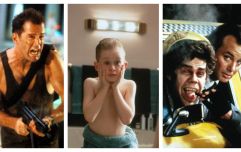 END_OF_DOCUMENT_TOKEN_TO_BE_REPLACED

"I am privileged to have this platform," Poulter continued.

"I hope that this shift to reduce my personal expression and increase the focus on issues that matter will result in a better outcome for everyone.

"This is not the end. Consider it an alternative path.

"Best thing you can do mate," said Boyega. "Well done."