Hurling got a shout-out on Bob's Burgers on Sunday night

"It's like if hockey, soccer, and baseball had a baby, and they joined a gang that liked to balance eggs."

It's always pretty funny to see people who aren't Irish react to hurling.

Even if you show a brief clip of a hurling match to someone from a different country, they react like you've just shown them the most horrible video they've seen in their lives. END_OF_DOCUMENT_TOKEN_TO_BE_REPLACED

And as confusing or barbaric as it may seem to non-Irish folk, we understand it, and we love it.

Which is why it's always good to see it get a bit of a mention on the global stage.

On Sunday night's episode of the animated comedy Bob's Burgers, Irish comedian Sharon Horgan was a guest star, and the Belcher family popped round to her house for a visit.

Horgan's character, Cathleen, had a game of hurling on in the background, which intrigued the Belchers. 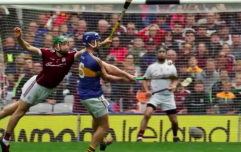 END_OF_DOCUMENT_TOKEN_TO_BE_REPLACED

Teddy asks: "What sport are you watching here? What is this? Grass Hockey? People polo?", to which Cathleen replies: "It's like if hockey, soccer, and baseball had a baby, and they joined a gang that liked to balance eggs."

Fairly spot on description, to be honest...

It looks like they're showing an animated version of Cork vs Tipperary, so they probably picked a good game to watch too.

popular
Netflix has just added an incredibly tense 97-minute thriller
Prime Video has just added 25 very big movies to its library
The Ultimate "That Actor From That Thing" Quiz
The 50 most iconic songs of all time* have been revealed
Stunning Mayo beach named the best place to swim in Ireland and the UK
WATCH: House of Hammer details the alleged crimes of award-winning actor Armie Hammer
Why Bran Stark is the true villain of Game of Thrones
You may also like
2 months ago
Limerick hurler arrested following alleged altercation with Tipperary player in Limerick pub
11 months ago
Hurling fans urged to limit social activity after All-Ireland final due to "high rate" of Covid
1 year ago
Major delays after bales of straw fall from lorry on M7
1 year ago
Irish Rail warns hurling fans travelling to Dublin for All-Ireland Semi-Finals that pre-booking is mandatory
2 years ago
Gardaí issue notice to anyone travelling to All-Ireland final on Sunday
3 years ago
WATCH: American comedian's reaction to hurling is one of the funniest things we've seen in ages
Next Page