It arrives on the streaming service very soon.

The Babadook was one of those horror movies that really stuck with you afterwards.

While on the surface it dealt with a mother and her young child being tormented by an evil demon that could reach out to them by a haunted book they found one day in their home, it was really about so much more than that. 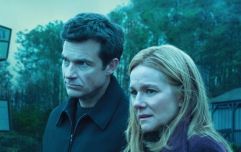 END_OF_DOCUMENT_TOKEN_TO_BE_REPLACED

To say what would be to give it away, and we really recommend you check it out, as it is also available to watch on Netflix right now.

The reason we talk about that horror movie is because the folks behind it have a new one coming out, and it looks equally intriguing and original, while still looking quite scary.

Cargo features Martin Freeman as a man on the run, with just 48 hours until the zombie virus takes him over and turns him into an unthinking monster.

Before then he must find a new guardian for his infant child, but in a world where every stranger could be another monster-in-waiting, finding someone he trusts enough to take care of his baby is not an easy task, especially with a world of zombies closing in on him and anyone he crosses paths with.

Cargo arrives on Netflix from Friday 18 May.

popular
One of the best action movies of recent years is finally available to watch at home
The JOE Movie Quiz: Week 138
QUIZ: Give this General Knowledge Quiz a whirl
The JOE Friday Pub Quiz: Week 278
QUIZ: See if you can ace this General Knowledge Quiz
QUIZ: Can you name every Batman actor in three minutes?
Irish employers urged to "take time" when lifting workplace restrictions
You may also like
1 week ago
The return of a horror icon and 7 more movies and shows to watch this week
1 week ago
Netflix to create Drive to Survive-style series around the PGA Tour
1 week ago
WATCH: Netflix's new documentary dives into the dark side of Tinder
2 weeks ago
A new Liam Neeson action thriller and 4 more big trailers you might have missed this week
2 weeks ago
WATCH: The Byrdes plot to escape the crime life in new look at Ozark's final season
2 weeks ago
New Netflix docuseries could be your next true crime obsession
Next Page