"Love Island has been my world."

Caroline Flack has confirmed that she is quitting Love Island.

The presenter, who has been a part of the show since it returned to ITV in 2015, said that she has decided to "stand down" from the upcoming series.

END_OF_DOCUMENT_TOKEN_TO_BE_REPLACED

She took to Instagram on Tuesday morning to confirm the news.

"There have been a significant number of media reports and allegations in regards to my personal life," she said.

"While matters were not as have been reported, I am committed to cooperating with the appropriate authorities and I can’t comment further on these matters until the legal process is over." 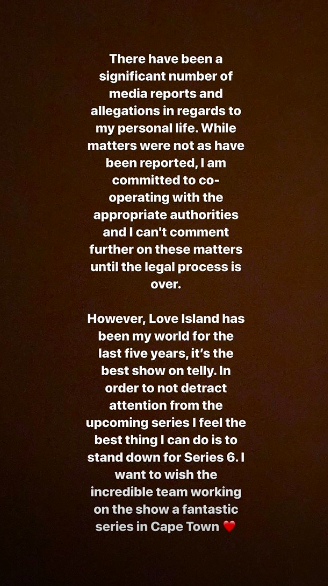 "However, Love Island has been my world for the last five years, it’s the best show on telly."

"In order not to detract attention from the upcoming series I feel the best thing I can do is stand down for series six. I want to wish the incredible team working on the show a fantastic series in Cape Town."

Flack's departure from the show comes after she was arrested and charged with assault last week following an altercation with boyfriend Lewis Burton.

END_OF_DOCUMENT_TOKEN_TO_BE_REPLACED

The presenter added that she has "never experienced such kindness and love in my whole life" since.

"Not just from friends and family who are always the greatest, but also from total strangers who send messages to me offering help and understanding.

"Please know that I see them. And my boyfriend, Lewis, I love you."

According to reports, Burton will not be pressing charges against Flack.

Winter Love Island is due to air in early January 2020.

popular
QUIZ: Can you name all these European countries from a list of cities?
The JOE Friday Pub Quiz: Week 248
The 50 most iconic songs of all time* have been revealed
Three men arrested after reportedly attacking staff of premises on South William Street
People think they've figured out the ranking of the viewers on your Instagram Stories
Aer Lingus introduce new fee to bring carry-on bags onboard flights
PICS: The man with the biggest penis in the world has one unbelievable problem with it
You may also like
2 weeks ago
The Matt LeBlanc as every Irish auld lad meme has gone global in a big way
3 weeks ago
Here's the lineup for the final episode of this season of The Late Late Show
3 weeks ago
Five huge highlights from watching Friends: The Reunion
3 weeks ago
CONFIRMED: Money Heist season 5 is coming to Netflix in September
4 weeks ago
Here's the lineup for this week's episode of The Late Late Show
4 weeks ago
The iconic 'Bus W***ers' car from Inbetweeners is now up for sale
Next Page